NAVIGATION The Voyage Report > News > Will You Travel to See the Great American Total Solar Eclipse?

Will You Travel to See the Great American Total Solar Eclipse? 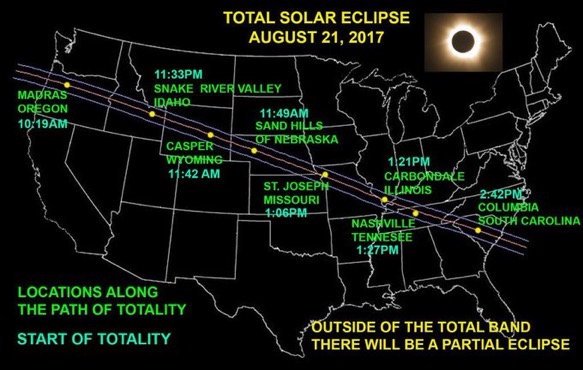 George Washington, Thomas Jefferson, and John Adams may have seen the last one.

So where will you be for the celestial phenomenon being called the Great American Total Solar Eclipse?

On August 21, 2017, a remarkably rare event will cross the United States from coast to coast: a total solar eclipse that will be at least partially visible from the entire continental U.S. The last time an eclipse was exclusively visible in the U.S.: 1776, the year America declared its independence from Great Britain. 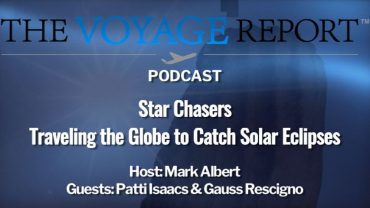 Patti Isaacs and Gauss Rescigno of Stillwater, Minnesota, are already planning to travel south to see it.

“The opportunity for us is to find the spot along that line that has the best chance of clear weather,” Rescigno told host Mark Albert for The Voyage Report podcast.

While part of the eclipse will be seen throughout the Lower 48 states, those viewing it along a 70-mile wide line from the West Coast to the East Coast–from Oregon to South Carolina–will be able to witness full totality.

Over the past 38 years, since 1979, Isaacs and Rescigno have traveled across the U.S. and to four countries as ‘solar chasers’ to catch eclipses.

“You see just this ring of sunlight with sort of a black hole in the middle,” Isaacs explained, still with a sense of wonder in her voice.

This year, they’ll make it a big affair with family and friends caravanning to a spot somewhere near Omaha, Nebraska, which should give them the best chance at seeing it–unless weather forces them to make a last-minute scramble.

There are key tips to know for how to view safely.

–>PHOTOS: The most famous solar eclipses in history, from CBS News

–>PLAN: How to see a solar eclipse

–>WATCH: Traveling Around the United States

Are you planning to travel to see the Great American Total Solar Eclipse? Let us know in the comments section below!

Mark Albert
Mark is a Peabody Award-winner who has reported in newsrooms across the country, most recently as a freelance correspondent at CBS News. He's traveled to 60 countries so far and plans to get to the rest—with a little luck.
Previous post More Passengers Get Intense Airport Security Pat-Downs Next post International Travel From U.S. Plunged After Pres. Trump’s Travel Ban