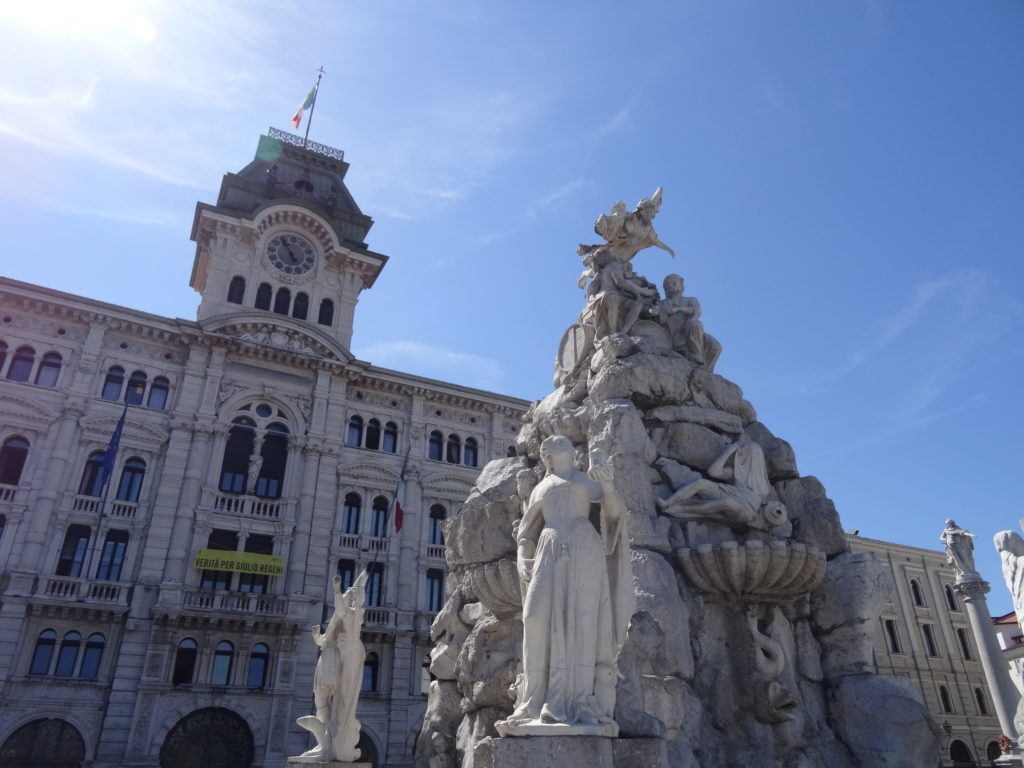 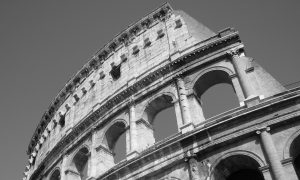 Explore the magical city of Venice; the birthplace of the Italian Renaissance in Florence; and climb to the top of St. Peter’s Basilica at the Vatican.

A Day Trip in Trieste

Let’s go to Italy for lunch!

Splendid idea for a day trip if you are vacationing on Slovenia’s coast in Piran or Potorož.

We made the drive to Trieste in under two hours on a modern highway and zipped by the signs marking the border without even slowing down.

No need to change money, either; both countries are in the Euro zone.

Actually, Trieste did not become a part of Italy until 1954.

Before that it was ruled by the Austrians or the Venetians.

The stones date back to Roman times, but there is also a strong influence from neighboring Slovenia. 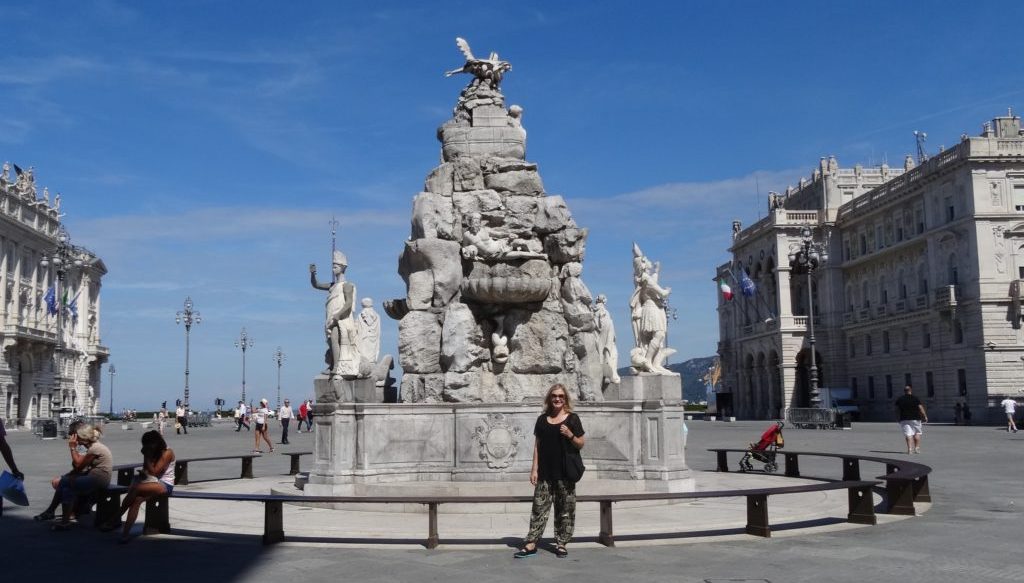 The author standing behind the Fountain of the Four Continents. Trieste’s “outdoor living room” opens onto the Adriatic; courtesy: Terry Anzur

Trieste has a walkable city center, once you solve the problem of where to park your car.

We pulled into a huge parking garage adjacent to the railroad station.

From there it was only a few blocks to the Piazza Unita del Italia, which local Slovenes call the Veliki Trg or Old Square.

It is open on one end to the Adriatic Sea, and is ringed with cafes. 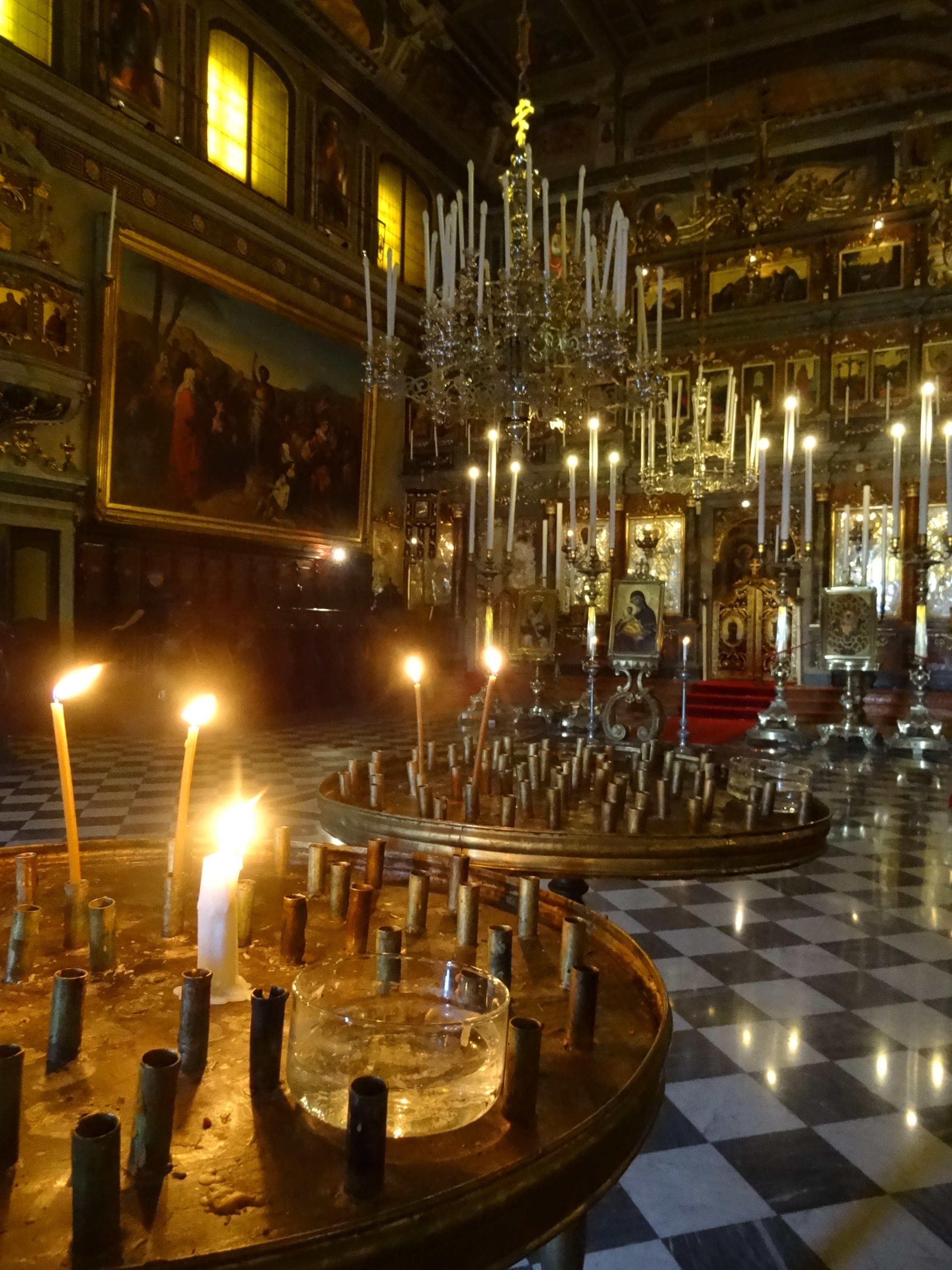 Greek Orthodox Church, one of many splendid interiors you will discover on a walking tour of Trieste; courtesy: Terry Anzur

From the square, street signs pointed the way to a walking tour of other landmarks.

This isn’t a knock-your-socks-off destination like Florence, Venice or Rome but it rewards a self-guided stroll on foot to explore the history from Roman times onward.

Signs are posted in several languages, including English, give a few basic facts about the landmarks.

You can get by without a guidebook, but it was helpful to buy a map. 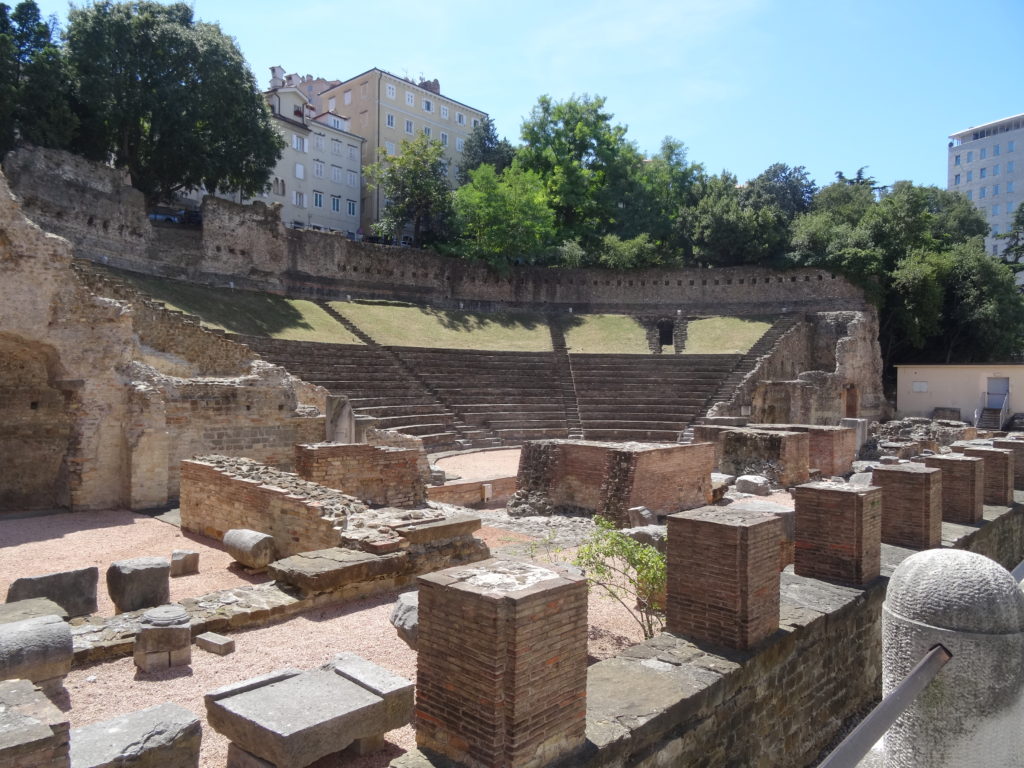 Continue up the hill to the Castello for splendid views, and a museum housing the city’s collection of Roman artifacts and vintage weapons.

The city has posted this video in English with voiceover that sounds like it was done by a robot:

By the time we made the trek up, around and down the steep hills we were ready for lunch at Fratelli La Bufala on the Canal Grande.

The pizza menu offered several vegetarian choices and the super cold frizzante was just what we needed! 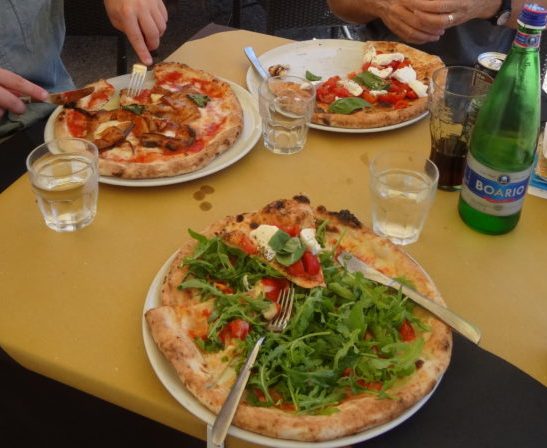 Time for lunch by the Canal Grande, showing the influence of nearby Venice; courtesy: Terry Anzur

Visiting the Miramare Castle was the highlight of our day trip to Trieste.

The nicely restored rooms give insight into the life of second-tier nobility in the mid to late 1800s, including a Hapsburg son who was named Emperor of Mexico. 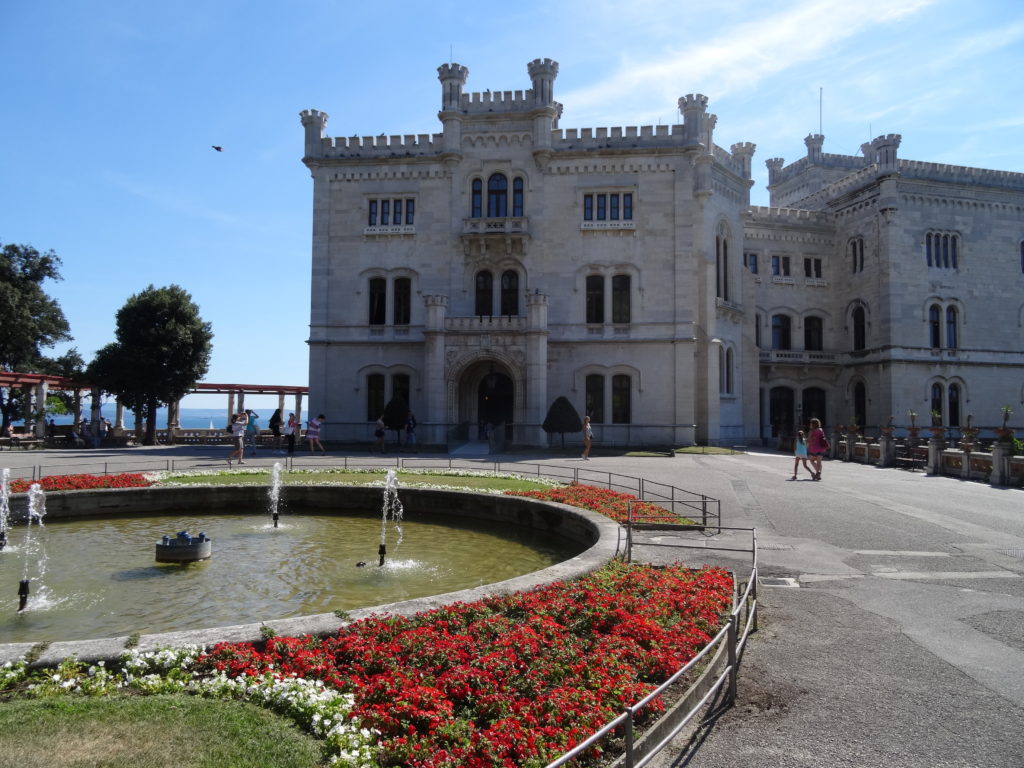 The approach by car is a bit tricky on a nice day, as the narrow road along the coast will be crowded with vehicles and people sunning or swimming in the sea.

The waters around the castle are a marine reserve, so it’s a lot more peaceful after you park and walk inside the grounds. 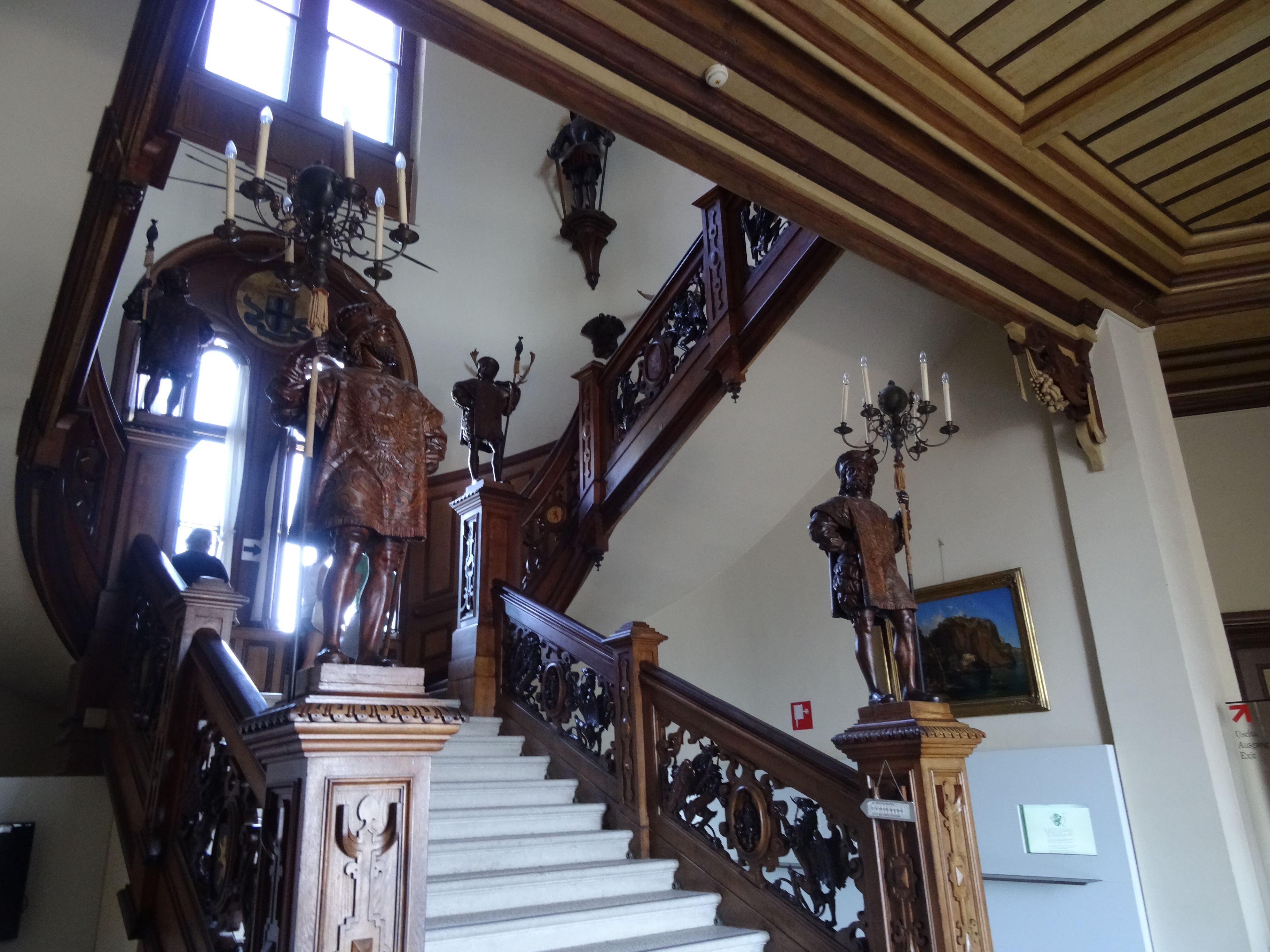 Admission to the park is free, but the museum costs 8 Euros with a discount for students 25 and under.

The parkomat pay station was broken when we visited in early August, so we paid a lady tending the gate on the way out. 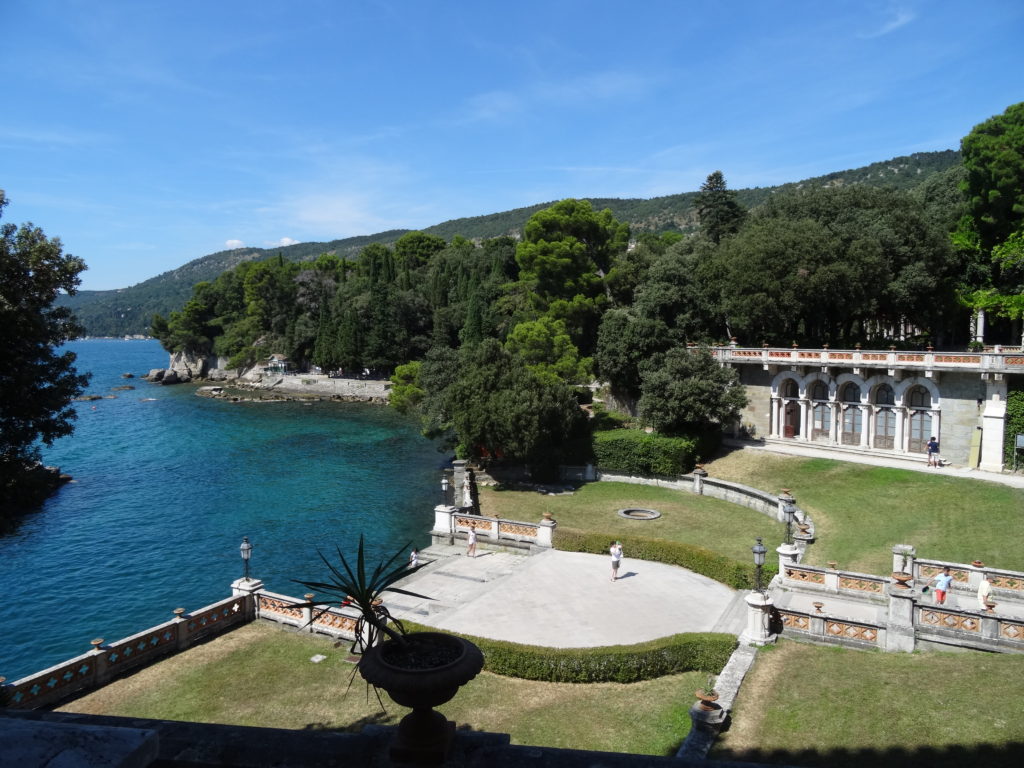 If traveling by air, there are five nearby airports from which you can get to Trieste:

Major transportation options are available from the various airports, including buses, shuttles, taxis, and rental cars.

Trieste is, at most, two hours away by car.

Trieste is the regional capital of the Friuli Venezia Giulia region, which also includes the provinces of Gorizia, Pordenone, and Udine.

A tourist visa is not required for stays under 90 days. For more information, check out the U.S. State Department’s Italy page.

What did you do on your visit to Trieste, Italy? Share your favorite tips in the comments section below!

Explore the magical city of Venice; the birthplace of the Italian Renaissance in Florence; and climb to the top of St. Peter’s Basilica at the Vatican.