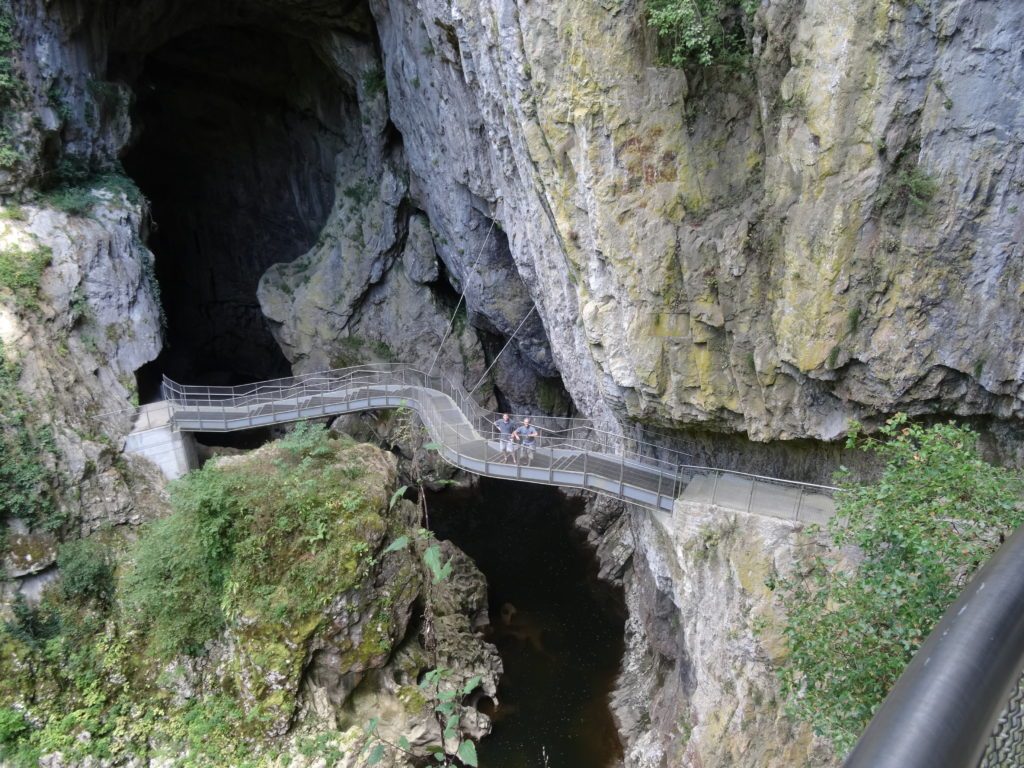 Descending into these awe-inspiring underground cathedrals is like visiting another planet.

By sheer volume, these Slovenia caves are said to be one of the world’s largest cavern systems.

UNESCO has done a great job of creating a worthwhile experience that is both fun and educational, but respects the preservation of the site and surrounding karst region. 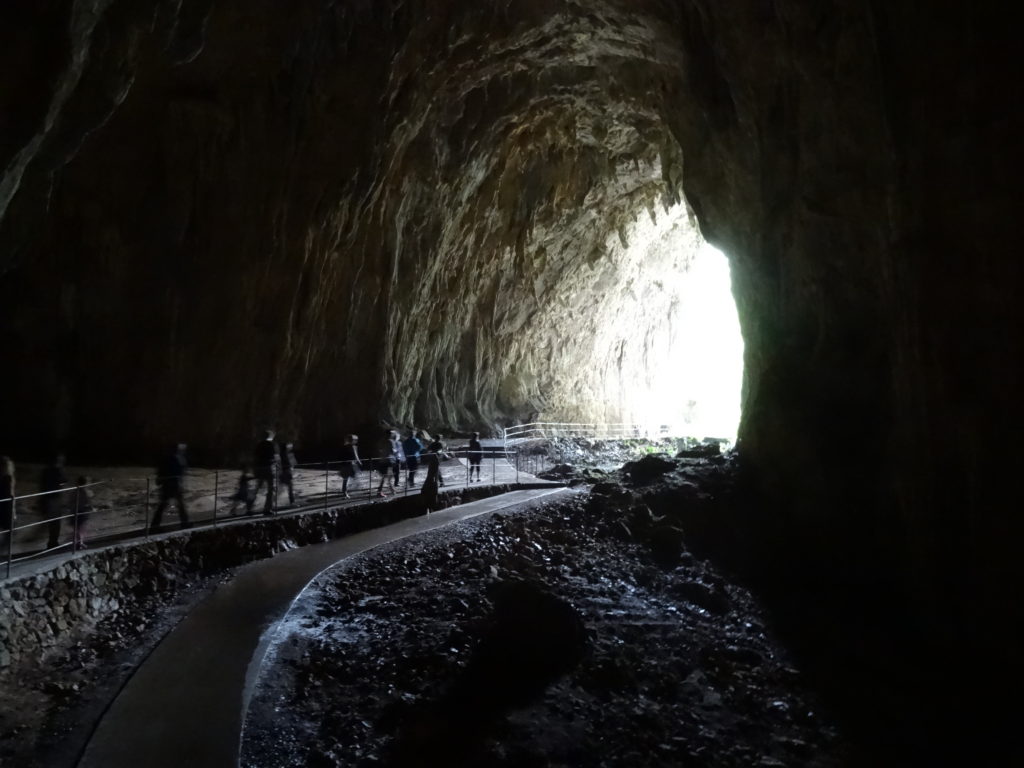 The entrance to the UNESCO underground Škocjan Caves, in Slovenia; courtesy: Terry Anzur

The park’s website has all the information you need to plan a visit.

There’s a pleasant waiting area with drinks and snacks for sale near the ticket booth.

Right on the hour, the entire group filed down a long hillside path to the cave entrance, where visitors are divided into smaller groups according to preferred language, and paired with a guide.

A guided group prepares to descend into the Škocjan Caves in Slovenia; courtesy: Terry Anzur

There are hundreds of steps on steep and sometimes slippery paths, so even the basic tour would not be an option for smaller kids, those with mobility issues or not prepared with sturdy walking gear.

Photography is not allowed in the biggest caves of the must-see formations with names like “The Organ,” and “Paradise.”

We clambered up and down crude steps along the gorge carved out by the Reka River, and crossed suspension bridges.

But definitely bring your camera.

At the very end of the guided walk, there is a photo opportunity. 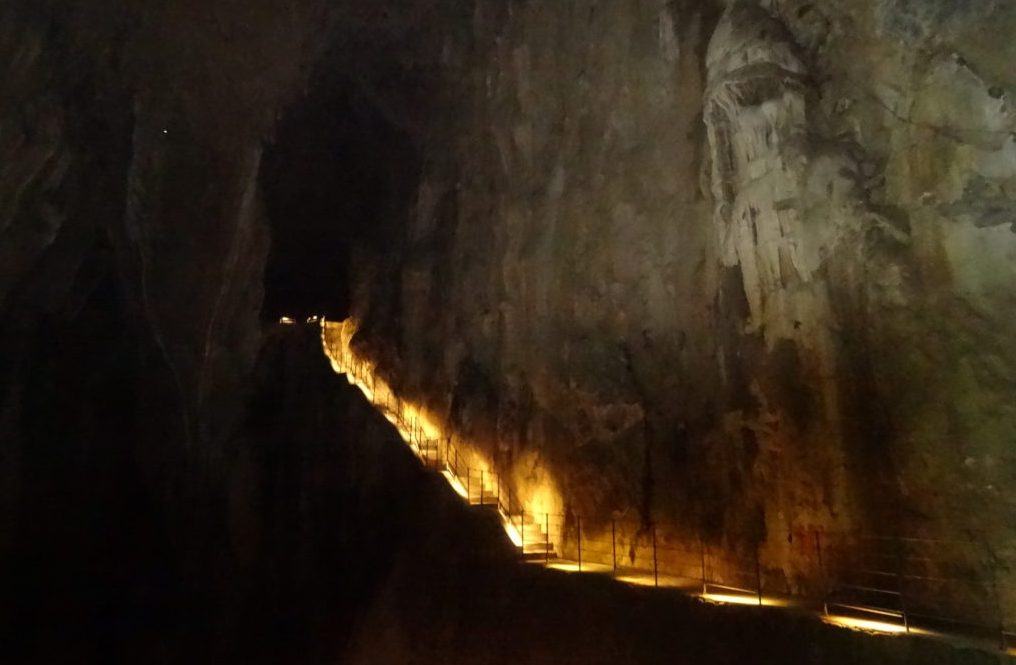 Škocjan Caves have the immense scale of an underground cathedral, with lots of steps and suspension bridges; courtesy: Terry Anzur

Amazing to see the remains of railings, steps and bridges built by the mountaineering clubs who first developed the area as a hiking destination in the 1800s.

Fortunately, the rusty railings have been updated to modern safety standards without losing the natural feel of the experience. 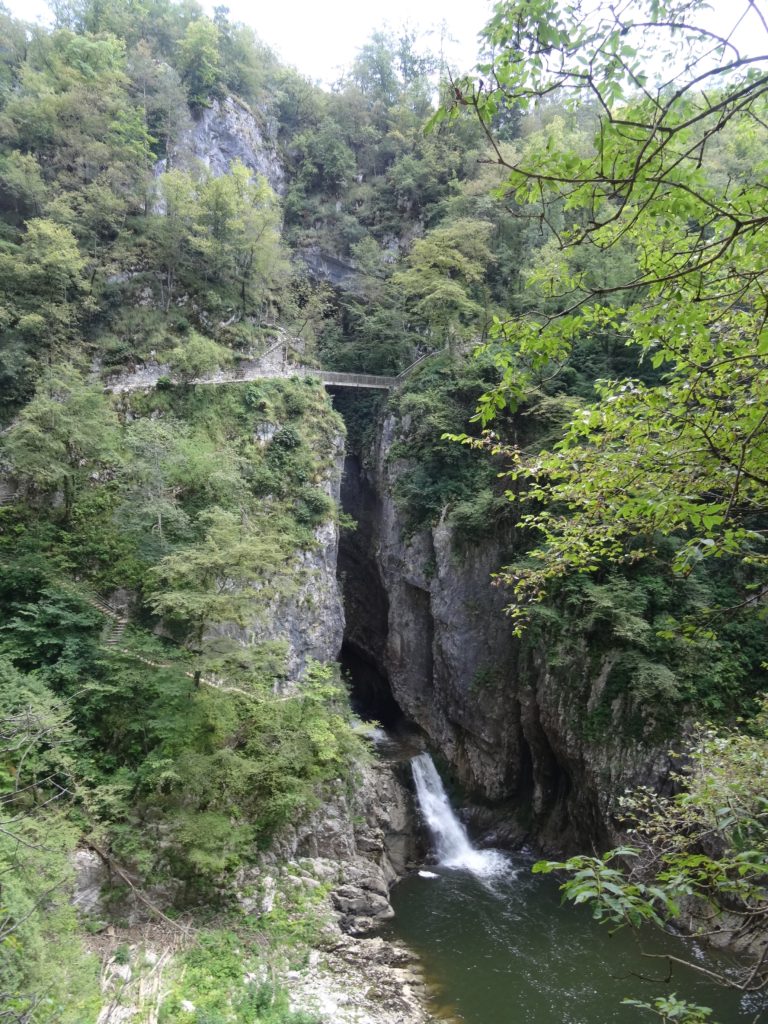 One of several waterfalls on the hiking path near Škocjan Caves; courtesy: Terry Anzur

Tours and Activities in Slovenia

The guided underground tour plus extension ticket was 21€ (about $22 USD) per person at the time of our visit, with discounts for students and seniors.

Bring a sweatshirt for the underground chill.

Allow about 3 hours. Serious hikers can spend more time on a longer trail. Parking is free.

And this isn’t the only underground experience in Slovenia!

The Postojna Caves offer a train ride through the formations and may be a better alternative for families with small kids.

It ranks as Slovenia’s most popular natural attraction, not far from scenic Predjama Castle carved into the rocks nearby.

But if you are fit and up for a challenge, Škocjan Caves are a day well spent in one of the world’s greenest countries. 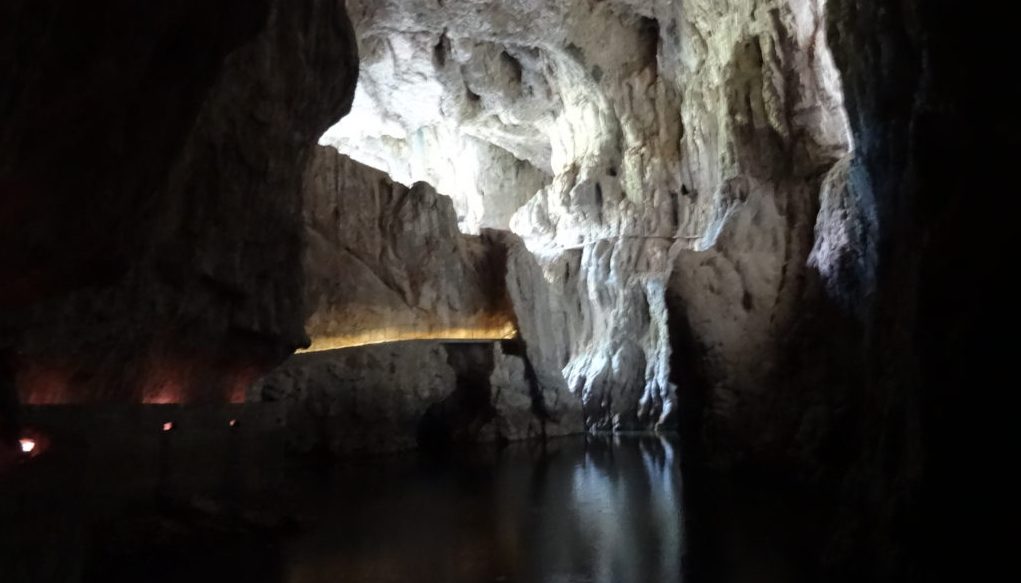 From the airport, transfers are available to the cities of Ljubljana or Kranj by bus, shuttle, taxis, and rental cars.

Škocjan Caves are just outside the town of Divača, an easy drive from Ljubljana, less than one hour on the main highway E61.

The park’s website has all the information you need to plan a visit to Slovenia caves.

Tours in multiple languages start on the hour from 10 am to 5 pm in the summer months, less frequently in other seasons.

The Slovenia Tourist Board has put together a list of practical information.

More information on accessible tourism in Slovenia is here.

A tourist visa is not required for stays under 90 days. For more information, check out the U.S. State Department’s Slovenia page.

What did you do on your visit to Slovenia? Did you visit the Slovenia caves? Share your favorite tips in the comments section below!

Jordan
Peel back Jordan's layers of history in the capital, Amman; swim in the Dead Sea; see where Jesus performed a miracle in Umm Qais; and behold the ancient Treasury embedded in the Petra cliff face.