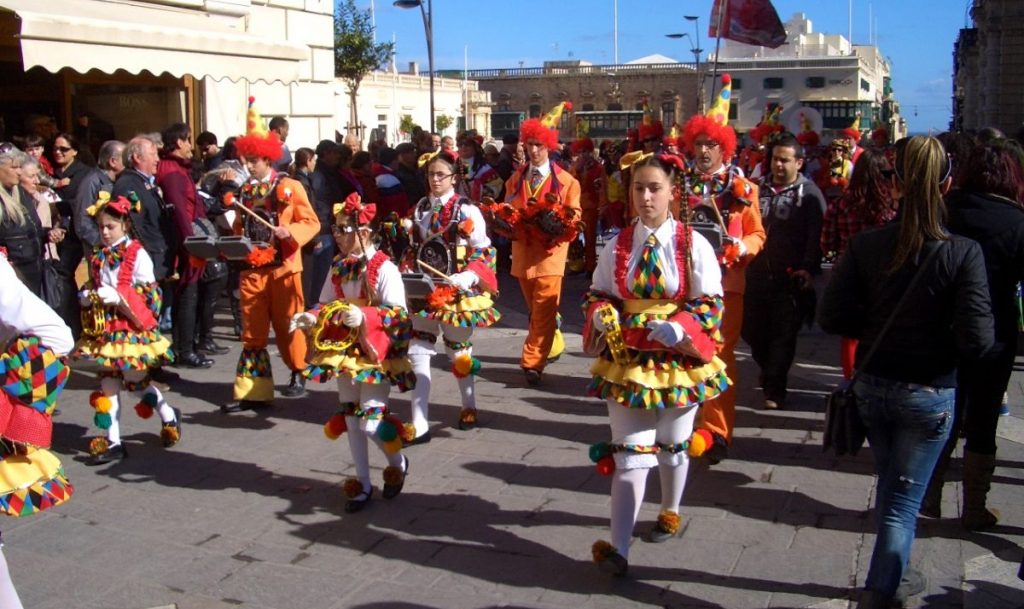 Malta
Visit Malta and the Maltese Islands for their magnificent Baroque architecture; a legacy of museums, palaces, and churches; and fresh coconut milk.

When people in Malta hit the streets for Carnival, it’s not really for the benefit of tourists. 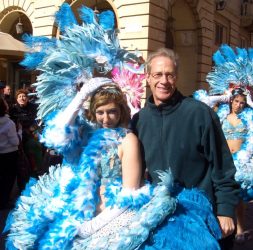 If you are lucky enough to be here for the party, you’ll feel like family.

We didn’t plan to be here for Carnival, the pre-Lenten revelry celebrated in most Christian countries prior to Ash Wednesday.

Known as Mardi Gras in New Orleans or Carnaval in Rio, the festival generally occurs in February. It was just a coincidence that we were here as part of a family trip with our son, on winter break from graduate school.

As we arrived on a quiet evening, we had no idea of the massive party that was about to break out.

The streets of Valetta seemed almost deserted, so we settled into our cozy apartment with scenic balconies overlooking Old Bakery Street.

While a 16th century building sounds like it would be charming, it was also challenging.

We couldn’t figure out how to use the shower without flooding the bathroom, and at one point we blew the entire electrical grid while trying to cook dinner and fire up all of our electronic devices. Fortunately, our patient host came to the rescue.

–>SAVE: First time Airbnb users can save $40 with our referral link. 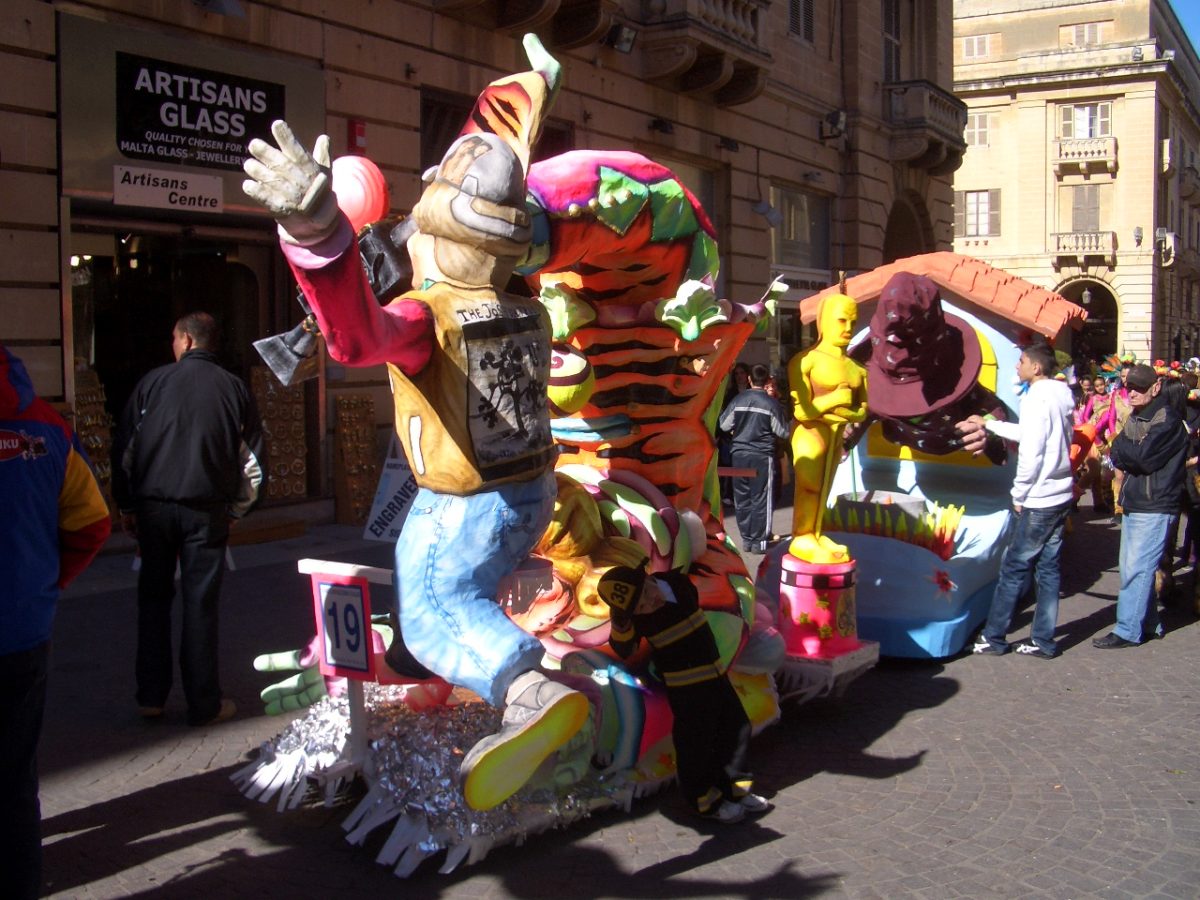 Next morning, we woke up to marching bands, floats and colorful costumes everywhere.

It seemed like every kid in the country with a dancing costume or an musical instrument was in the lineup.

Lining the streets, proud family members jostled for photo ops. This, we were told, was only a fraction of the available participants who would appear in different parades over the following days and nights.

It wasn’t long before we were welcomed off the curb and into the street to pose with the the merry carnival crews. 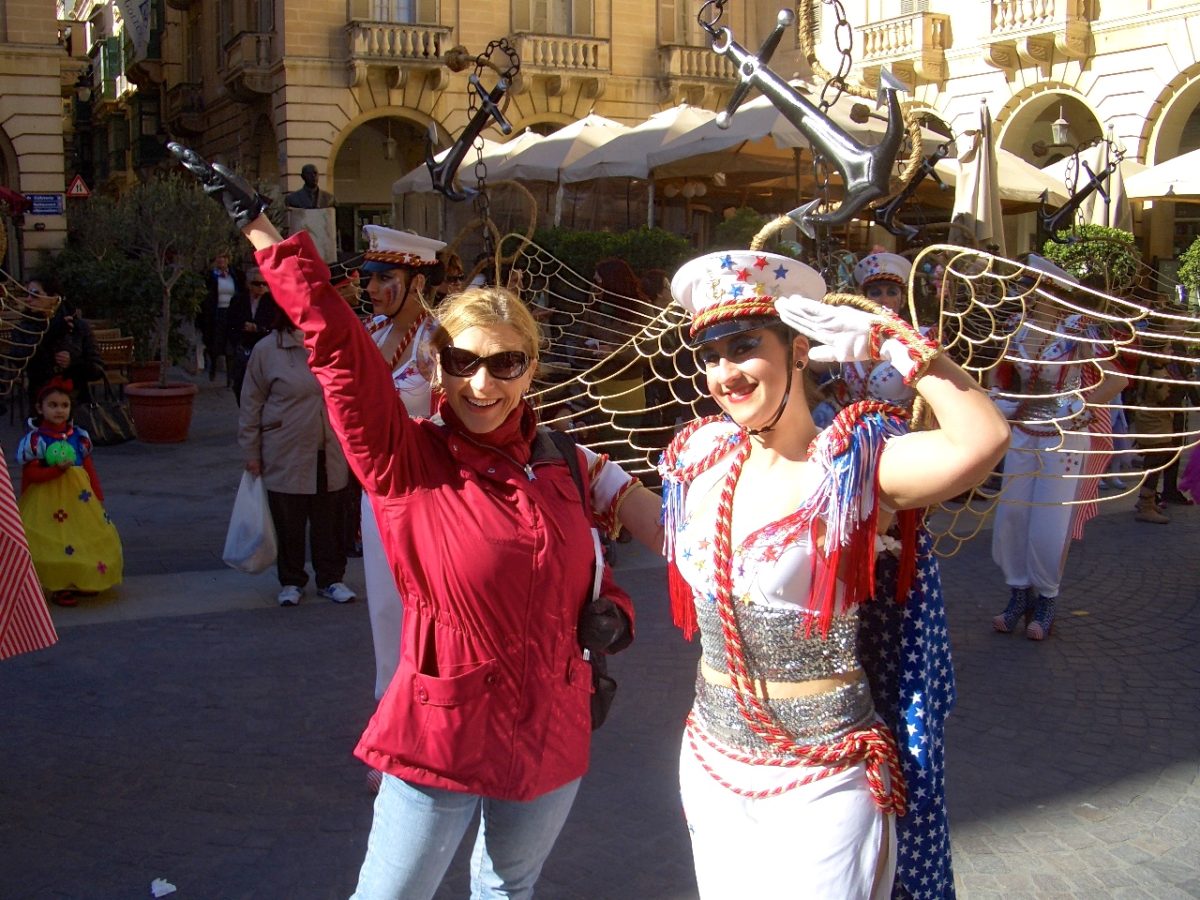 The author at Mardi Gras in Malta

With all the action on the streets, history was on the sidelines.

It turned out to be the perfect opportunity to have the splendors of St. John’s Co-Cathedral and the Grand Master’s Palace almost all to ourselves because nearly everyone else in town seemed to be in the parade or watching it.

The Knights of St. John originated during the crusades in the 11th and 12th century. After losing their prior home bases in Jerusalem and Rhodes, the Knights came to Malta in 1530.

In addition to the splendid church where their leaders are buried, they also founded a hospital that was on the cutting edge of medical care at the time. 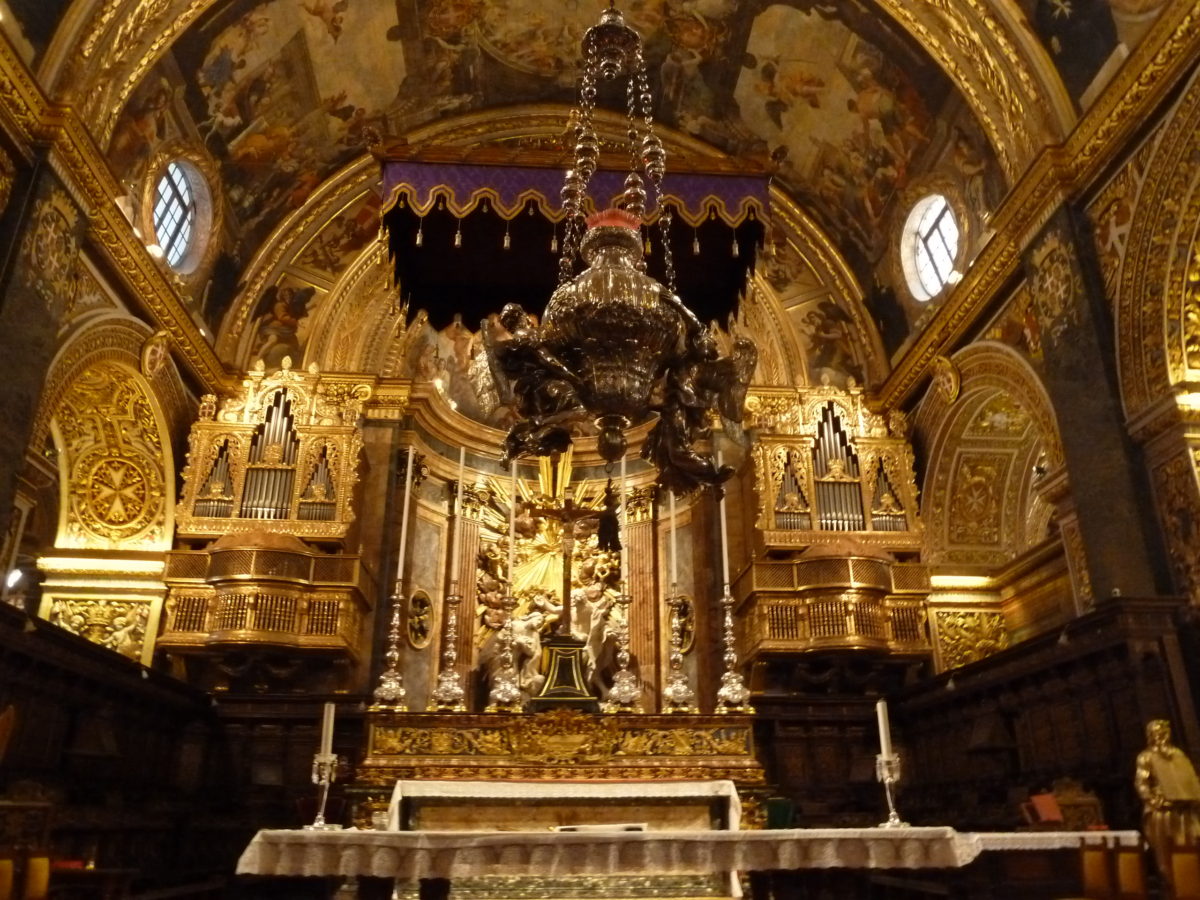 From the main depot in Valetta, public buses are a cheap way to see the smaller scenic towns like a local.

The Three Cities of Vittoriosa, Senglea and Cospicua offered quiet streets and lovely views of Valetta across the water.

On another day, we took the bus in the opposite direction through Sliema, ending up on a pretty waterfront in St. Julian.

Although a favorite with British retirees and hard-partying beach vacationers in the warmer months, we enjoyed a peaceful stroll to Gululu, an unpretentious restaurant that invites you to “sit by the water and enjoy the true tastes of Malta.” The resident dogs and cats looked on as we ate one of our favorite meals of the trip.

And no, we didn’t try the rabbit, a Maltese tradition which is offered in most of the tourist areas.

Memories of our pet bunny Snuggles made that a ‘hell no,’ even for the non-vegetarians in the family. 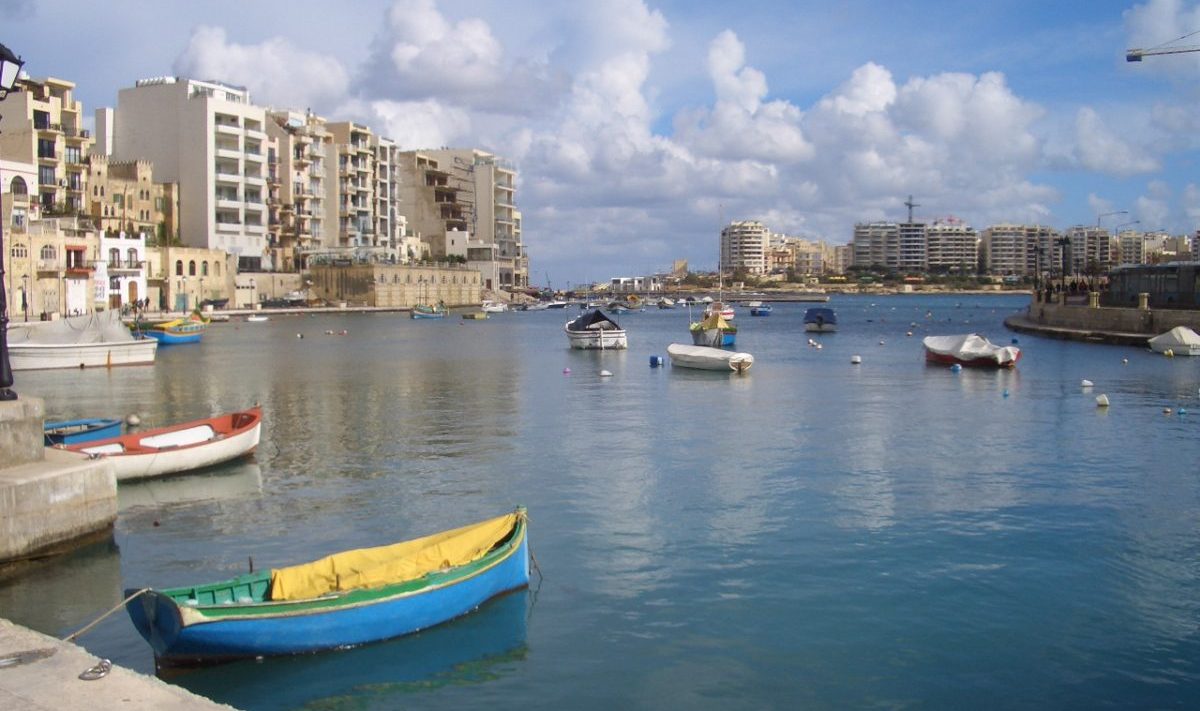 Plan ahead if you want to visit one of Malta’s most mysterious sights, the UNESCO-protected Hypogeum.

Thousands of bodies were buried in this vast underground necropolis, dating back to 3600 BC. Reservations are a must for the guided one-hour tour through the spooky labyrinth of chambers and passages. The number of visitors is strictly limited and no photos are allowed.

But there’s plenty to photograph above ground at the Tarxien Temples nearby. Believed to be as old as the underground complex, the massive stone blocks are decorated with symbols of plenty and fertility.

The present-day residents were unbelievably friendly, going out of their way to help us when we looked lost. 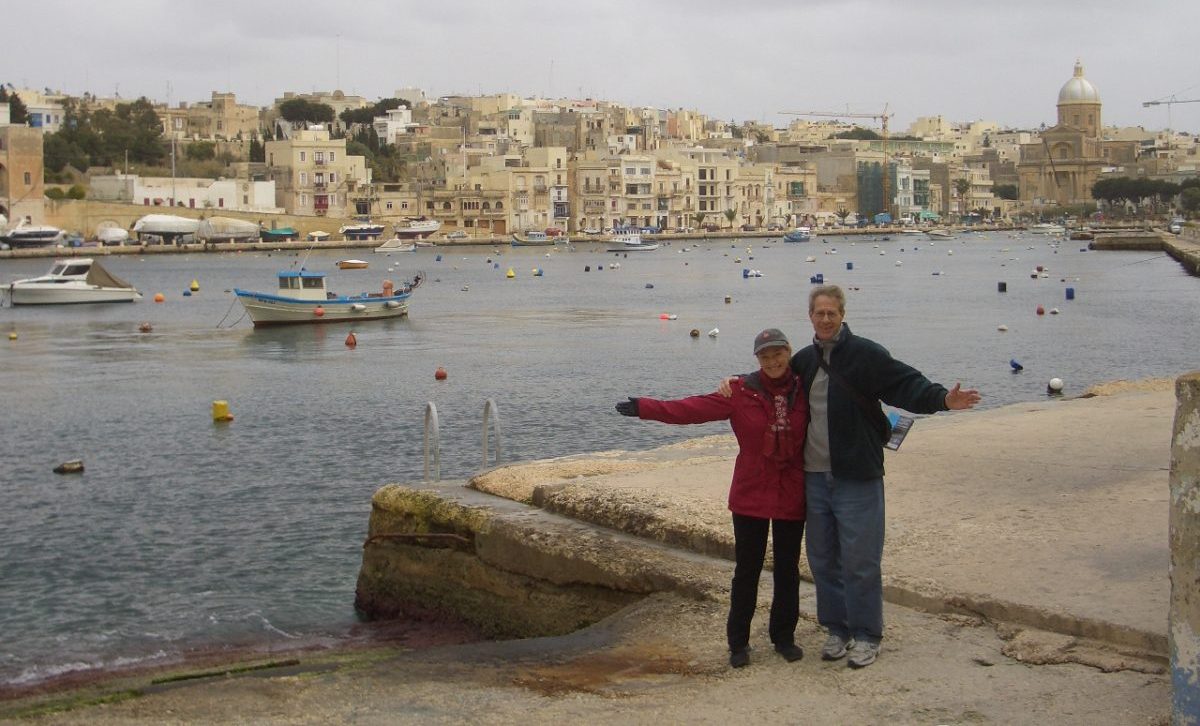 The author and her husband, Bill, in The Three Cities with Valetta in the distance

Visitors from the U.S., Canada and Europe do not require a visa. U.S. and Canadian citizens are allowed to stay up to 90 days and must be valid up to three months after your planned departure.

Malta is part of the European Union and uses the Euro.

What did you do on your visit to Malta? Share your favorite tips in the comments section below!

Malta
Visit Malta and the Maltese Islands for their magnificent Baroque architecture; a legacy of museums, palaces, and churches; and fresh coconut milk.