Courtesy: PBS/City in the Sky

A series on PBS called City in the Sky grants viewers a behind-the-scenes, all-access pass at the global aviation system – with an extraordinary inside look at the world’s busiest airport, an air traffic control center, a medical center that remotely assists flight crews in the air, a massive catering operation, the cavernous baggage facility without a single baggage handler in sight, and even the animal cargo operation (yes, even horses have assigned seating; can you guess which breed gets to ride up front?).

If you’ve ever flown on an airplane, ever stared up into the sky as one passed overhead, or imagined yourself as a pilot, this series will fascinate you. Even as someone who’s flown more than a million miles, it captivated me.

It is, without a doubt, one of the best series on PBS I have ever watched (no offense, Ken Burns!).

I chatted with the series director, Russell Leven, for our fourth podcast episode.

He’s a globetrotting journalist and it was a fascinating conversation. As you’re reading this, he’s already off on his next adventure – the Arctic, which we talk about in during the episode.

Here’s a short preview of what he told me he learned while directing ‘City in the Sky’:

Visit our podcast page to choose your favorite platform to listen to our podcast: “City in the Sky – PBS Series Goes Inside Aviation.”

Buy the three-part series today or stream it on your local PBS channel.

Use of these referral (“affiliate”) links helps support our original content and journalism. Thank you.

Don’t miss our other episodes: 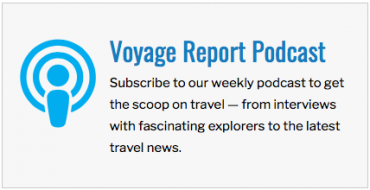 Have you seen this PBS series? What did you think? Let us know in the comments section below!

Mark Albert
Mark is a Peabody Award-winner who has reported in newsrooms across the country, most recently as a freelance correspondent at CBS News. He's traveled to 60 countries so far and plans to get to the rest—with a little luck.
Previous post Hurricane Nate Makes Landfall on U.S. Gulf Coast; Airport Closed; Cruises Diverted Next post Despite Travel Warning, Europe Airports See Boost in Passengers