Why People Love to Fly the Airline They Hate the Most 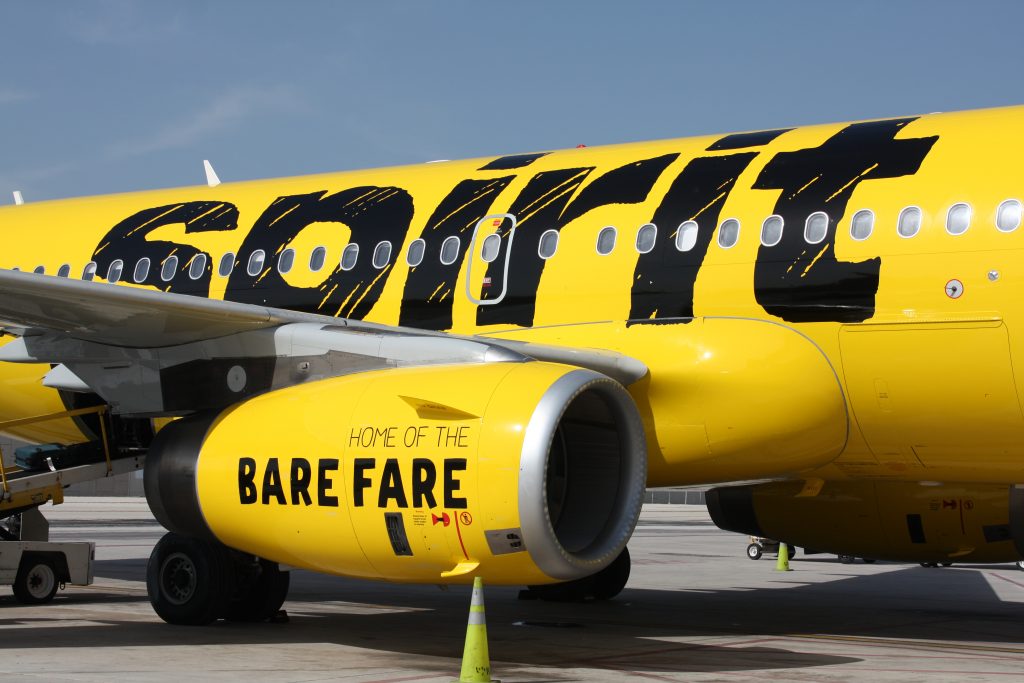 Spirit Airlines is a twin anomaly in the air travel industry: very successful and frequently disliked by consumers. While sporting healthy margins and significantly growing the number of passengers they serve, the ultra-low cost carrier has ranked high on customer complaints and low on measures of satisfaction.

What’s the secret? Realizing that no matter how much some people complain, enough will stand in line to save money — and the sum can be significant.

By multiple measures, Spirit is a leader when it comes to public displeasure. During 2016, the carrier had 6.74 complaints per 100,000 boarded passengers, according to the Department of Transportation – last of the dozen US airlines ranked. The average across all major airlines was 1.52. That was still a large improvement for Spirit over the previous year’s 11.73. And those are only complaints where the passengers go to the trouble of finding the appropriate DOT website and fill out the online form. 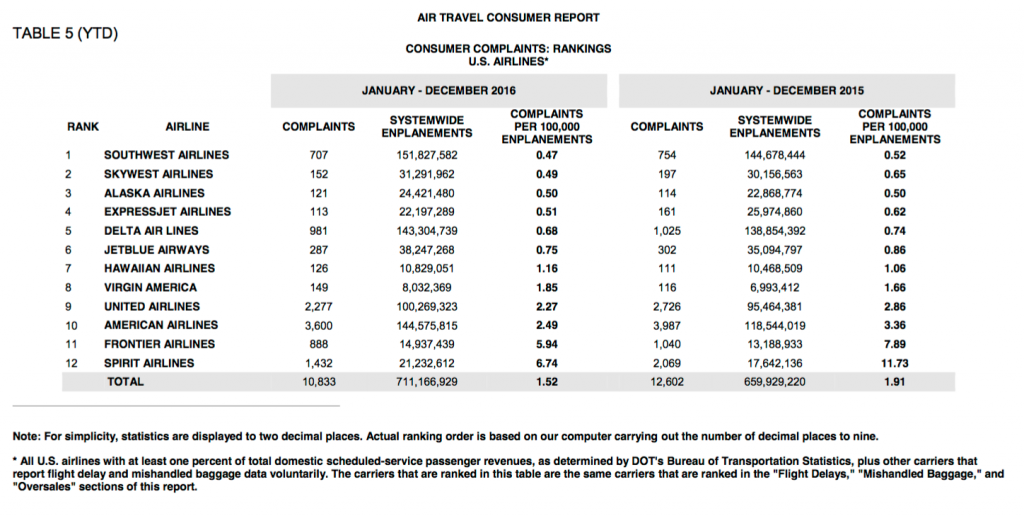 A check of the American Consumer Satisfaction Index finds on the 0-100 satisfaction scale, the industry average was 72 in 2016; top carriers JetBlue and Southwest each rated 80. Spirit hit 62, which again was an improvement over the previous year’s 54, which compared to the 2015 industry average of 69.

And yet, as baseball great Yogi Berra once said about a New York restaurant, “Nobody goes there anymore — it’s too crowded.” For the 12 months that ended in November 2016 (the most recently available statistics at the time of writing), Spirit had 18,965,000 passengers—a jump of 20.9 percent over the previous 12-month period, despite leading in customer dissatisfaction among airlines.

Spirit was the ninth largest US domestic carrier during the 12 months. They were solid in other airline statistics, such as revenue passenger miles (7th), and available seat miles (also 7th).

However, they ranked 11th in on-time departures, hitting only 75 percent, meaning you have one chance out of four of being on a late flight, with an average delay of a little over an hour.

“I didn’t know anything about them”

Travel writer Ashley Smith, who owns the blog My Wanderlusty Life about traveling with limited time, took Spirit from Boston to Dallas and reviewed the experience. It wasn’t pretty.

“It was a last-minute flight and the price was really, really cheap,” Smith told The Voyage Report. “It was something like $50 — stupid cheap. I didn’t know anything about them.”

What went wrong? “Everything!” she laughed. “The gates are disgusting. You feel like you’re in a garbage dump. There’s trash everywhere. The seats don’t recline. The tray table was a big as my hand. There’s no seat-back pocket. It’s the worst quality you can image.” Add in charges for stowing a carry-on in an overhead bin, little leg room, the refusal to take electronic boarding passes, and a scale that Smith swears was seven pounds over (resulting in an extra charge). “I’d have rather have taken a bus to Dallas,” she said.

She admits she didn’t check ahead on social media, where she would have seen many complaints. “I don’t like to put a lot of stock in that because people are pissed off all the time,” Smith said. “People hate flying anyway so they’re going to complain about something.” This time they were right.

The problem with consumer reviews, according to Spirit, often comes from people who purchased tickets from their-party online travel agency sites. “They’re not given the information about our separate bag charges, or if you want a specific seat you pay a little extra but if you don’t care where you sit, you don’t pay extra,” Paul Berry, Spirit’s director of corporate communications, told The Voyage Report. “When they get to the airport, they’re frustrated and angry.” They then take to social media for negative comments, he said.

Berry added that while consumer satisfaction studies will look at different segments of the automotive industry, not comparing compact and luxury cars together, “when they rate airlines, they rate as if they’re all the same.”

“You get what you pay for”

Or were they? Eric Zorn, an op-ed columnist with the Chicago Tribune, also took a flight, with his family, and ended up writing his “true confession” that he didn’t hate it.

“You get what you pay for,” Zorn told The Voyage Report. “Once you know what’s up, it’s not a shock. It’s like taking the Greyhound bus. You just have to change your expectations and you’re fine.”

He wouldn’t take it for a long flight, but something under two hours? Absolutely. “I never found it to be dirty,” he said, and Zorn has used the airline since his column on it appeared in 2015. “The whole airline industry is a lot grubbier than it used to be. It’s cramped. The flights are always full.”

“I think a lot of people when they fly Spirit the first time they’re shocked,” Zorn said. “When we first got on the plane, I was annoyed by it. But then as I thought about it later and processed it and adjusted my expectations for our return trip, I got my mind around it totally. If you go to a McDonald’s and expect a waiter to come to the table, you may be disappointed. But the next time you go up to the counter, you know what to expect.” 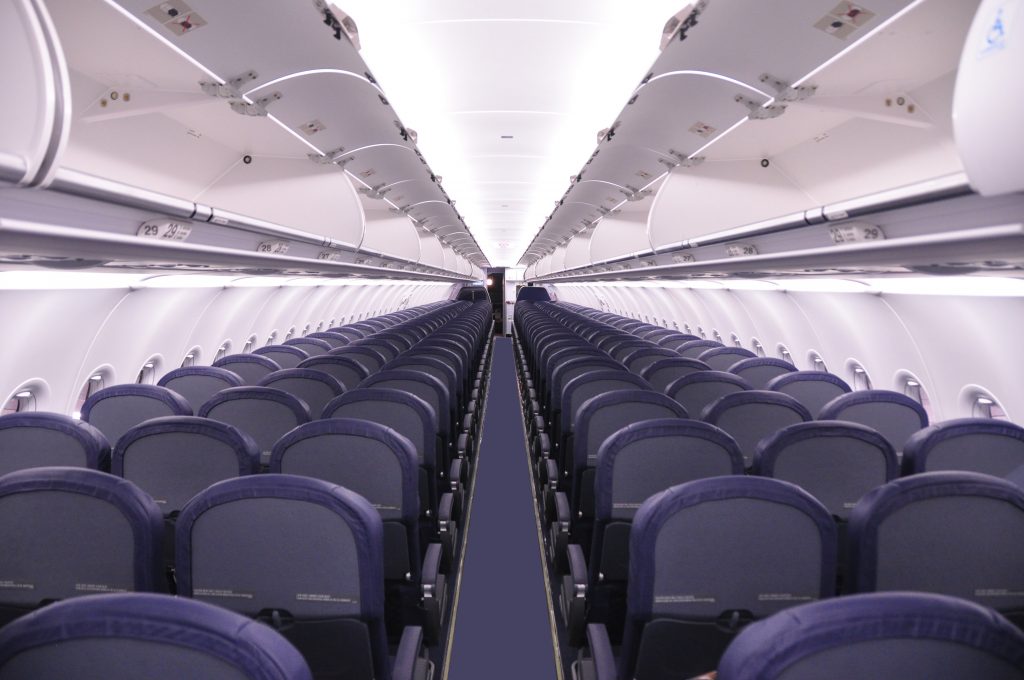 George Hobica, consumer travel journalist and founder of the site AirfareWatchdog.com, said that expectations are also a matter of context. “[Spirit’s fares are] sometimes half of what other airlines charge for a non-stop flight,” he said in an interview. “Sometimes they’re a third. It’s true their performance is bad, but Spirit is where some of the airlines used to be. The entire industry has improved.”

The people who keep going back to Spirit — and with such a large growth in passenger numbers, there’s a limit to how many consumers take the “one and done” attitude — learn how to game the system as best they can to avoid wallet-thinning fees. They pack very light, take a backpack or small suitcase that will fit under a seat, always carry less than 40 pounds (going over costs extra), print their boarding passes in advance, pay for any carryon or checked luggage they do need when they book, and bring their own snacks and water. And they don’t expect to arrive on-time, which means avoid Spirit for a business trip, “or a funeral,” Hobica wryly noted.

The allure of ultra-cheap seats has been strong enough that giants like American, Delta, and United now have their own low-price offers. “They’re tired of missing the 85 percent [of infrequent fliers.]”

But it may be that passengers are getting too wise. Comparing the four quarters that ended in Q3 2015 and Q3 2016, passenger yield — passenger revenue divided by the miles passengers paid to fly — was down by 18.2 percent. And the revenue per available seat miles was off by 12.7 percent.

If Spirit wants to keep the money rolling it, it may need to find new fees that passengers haven’t noticed.