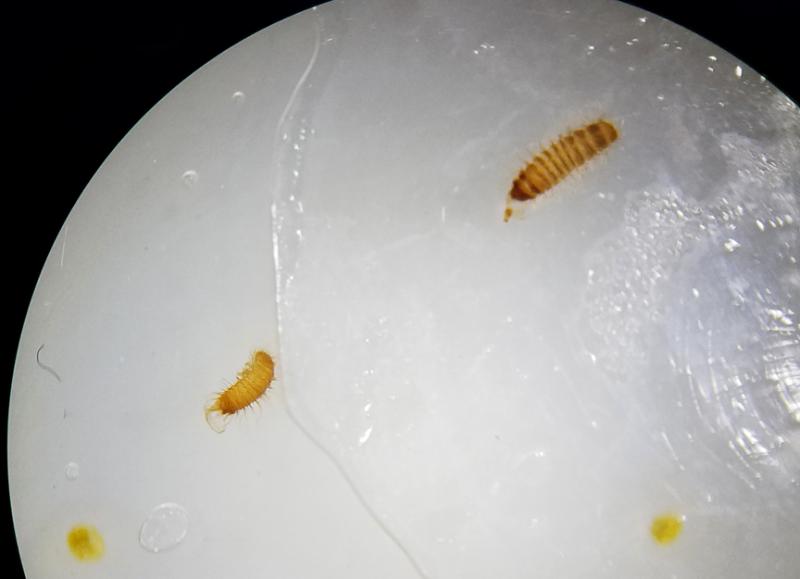 Two federal agencies are warning this summer and fall of invasive pests hitching a ride in the luggage of unsuspecting travelers. 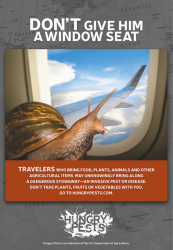 There’s even a new ad campaign and a special U.S. government website—HungryPests.com.

The latest ad from the U.S. Department of Agriculture shows a snail looking out the window of an airplane with the warning: “Don’t give him a window seat.”

“It’s easier than ever to travel the world. Unfortunately, the same is true for Hungry Pests,” the USDA site advises international travelers.

“Bringing home an exotic fruit or plant may seem innocent, but without knowing it, you may also bring along a dangerous stowaway. Please do your part to help protect our crops and trees.”

Agriculture experts say invasive pests damage the U.S. economy by an estimated $40 billion a year in losses to American farms, crops, and forest.

As if to illustrate the point, this month the U.S. Customs and Border Protection agency released images of “one of the world’s most destructive insect pests” to grains, cereals, and stored foods that a traveler brought with her from Sudan. 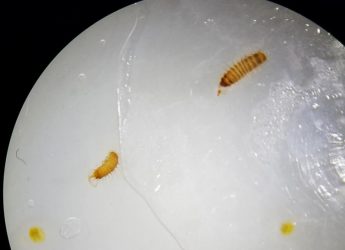 The unidentified woman had tried to bring dried berries with her through a customs checkpoint upon arrival August 3rd at the Philadelphia International Airport (PHL), according to a recent release.

The woman was given a secondary screening where agriculture specialists say they found “two immature insects” in the berries.

Further testing confirmed the pests as the Khapra beetle, an insect that can survive fumigation and starvation, and can sicken humans.

“The Khapra beetle poses a serious threat to our nation’s agriculture and to our economy,” Shawn Polley, Acting Port Director in Philadelphia, said in a news release.

“Our best defense against destructive pests, like the Khapra beetle, is to prevent their entry into the United States, and that is a mission that Customs and Border Protection agriculture specialists take very serious,” Polley said. 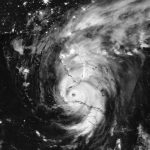 One Million Travelers Inspected Per Day

U.S. Customs and Border Protection says it inspects more than one million people a day by air, land, and sea.

On an average day, it also seizes 4,638 “prohibited meat, plant materials or animal products, including 404 agriculture pests and diseases.”

The Agriculture Department, whose Animal and Plant Health Inspection Service tests samples from CBP, warns travelers not to take “plants, fruits or vegetables with you” when returning to the United States.

Passengers in violation can be fined and travelers enrolled in the expedited security program Global Entry may have their membership revoked, CBP says.

Mark Albert
Mark is a Peabody Award-winner who has reported in newsrooms across the country, most recently as a freelance correspondent at CBS News. He's traveled to 60 countries so far and plans to get to the rest—with a little luck.
Previous post Some Florida Airports Damaged by Irma Reopen Tuesday; 14,000 Flights Cancelled Next post Travelers Skip MMR Vaccine Despite Spike in Measles Cases