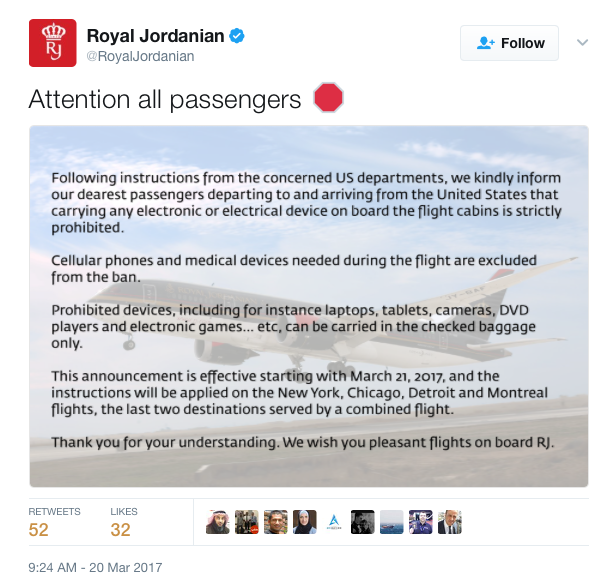 WASHINGTON (TVR) – U.S. authorities on Tuesday issued a pre-dawn order implementing a sweeping ban on virtually all electronic devices for fights to the United States from 10 airports in eight Middle Eastern and North African countries, acting, they said, on intelligence information they would not disclose publicly but stating that the action was “necessary to enhance security.”

“Evaluated intelligence indicates that terrorist groups continue to target commercial aviation and are aggressively pursuing innovative methods to undertake their attacks, to include smuggling explosive devices in various consumer items,” a senior administration official told reporters in a Monday night briefing that was under an information embargo until 6am this morning.

Virtually all electronic devices including laptops, tablets, cameras, DVD players, and electronic games will not be allowed into the aircraft cabin and must be put in a traveler’s checked luggage, which is inaccessible during the flight.

-–>LEARN: How We Save Hundreds Off International Flights

Cell phones and medical devices necessary during the flight will still be allowed.

President Trump’s press secretary, Sean Spicer, told reporters at the White House daily briefing Tuesday afternoon, “The steps that are being taken are commensurate with the intelligence that we have.”

About 50 flights a day are expected to be impacted, U.S. authorities said.

No American carrier flies from those countries non-stop to the U.S., although American citizens traveling on those routes will have to comply with the new electronics ban.

The new rules do not apply to flight crews.

Amnesty International USA immediately criticized the ban, saying in a statement “this could be yet more bigotry disguised as policy.”

“This could be the latest in what looks set to be a long line of discriminatory measures deployed by the Trump administration against Muslims around the world,” Amnesty USA’s Naureen Shah said.

It bars most electronic devices on non-stop flights to the U.K. from Turkey, Jordan, Lebanon, Egypt, Tunisia, and Saudi Arabia.

Unlike the American electronics ban, the U.K. version will bar some bigger smart phones from flights if they are larger than 6.3 inches long by 3.66 inches wide by .60 inches deep, the official directive said.

–>WATCH: Mark Albert discusses the impact of the electronics ban on WBAY-TV

Royal Jordanian tweeted a five paragraph statement to its 287,000 followers Monday morning, East Coast time, a day ahead of the public announcement, stating it was implementing an electronics ban “following instructions from the concerned US departments.”

Royal Jordanian said the ban applies on all its routes to the U.S., which includes flights to New York, Chicago, and Detroit, effective Tuesday, March 21, 2017.

The ban on most electronics will also apply on its flight to Montreal, because that is a continuation of the flight that serves Detroit, the airline said.

The statement ended by adding, “Thank you for understanding.”

Royal Jordanian later deleted the tweet and the statement from its Twitter account, replaced by only a single sentence: “Further updates will be announced soon regarding #electronicsban.”

The original tweet is posted at the beginning of this article.

Later, however, U.S. authorities told reporters they were not displeased that the airline had released the information nearly a full day before the coordinated announcement from the Department of Homeland Security, Transportation Security Administration, and the State Department.

By Tuesday morning, Emirates had posted a “news flash” on its website for passengers, notifying them that as of Saturday the carrier would begin enforcing the electronics ban.

Curiously, the statement says the ban is valid “until 14 October 2017,” even though U.S. authorities repeatedly told reporters there is no end date to the restrictions at this point. 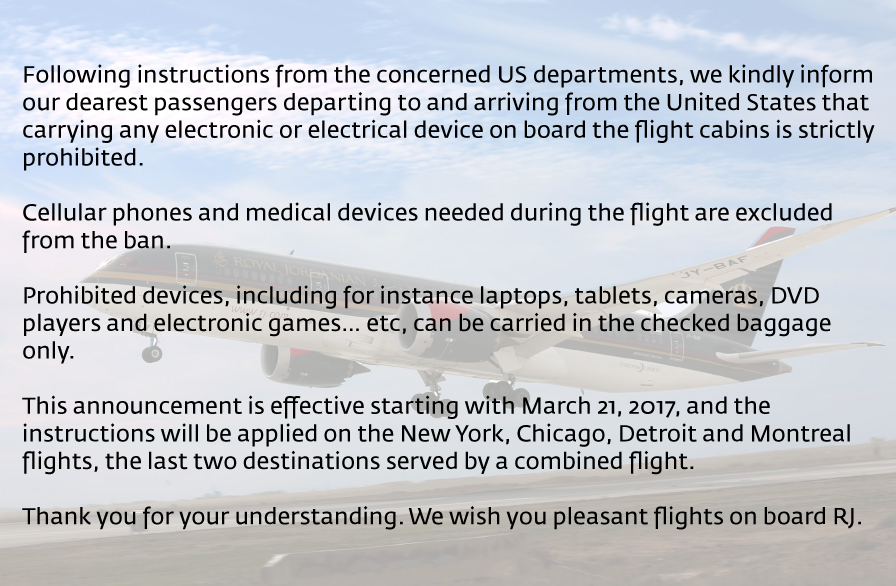 U.S. agencies are giving the carriers up to 96 hours to implement the electronics ban. D.H.S. formally issued the emergency security directive to airlines at 3am Eastern Daylight Time Tuesday.

Another senior administrative official, one who deals with diplomacy, spoke to reporters on background shortly before the restrictions took effect.

“The State Department’s greatest priority is ensuring the safety of U.S. citizens and the protection of U.S. interests at home and abroad,” this official said.

“The United States remains concerned about terrorist groups’ continued interest in targeting civil aviation and it’s a concern that’s heightened by… several successful events and attacks on passenger planes over the last years.”

Officials from several U.S. agencies would not disclose how long the restrictions would remain in place, or whether they would eventually expand to other airports and countries, except to say that “we continue to evaluate our intelligence.”

Authorities would also not say where the information that led to the ban came from or when, stating simply, “As a matter of policy, we don’t publicly discuss intelligence information.”

However, senior administration officials did disclose they began reaching out to airlines on Sunday, March 19, meaning that after today’s announcement and the following 96-hour implementation period, which ends Saturday, March 25, U.S. intelligence agencies would have possessed the information for at least a week.

–>READ: How to Sail Through Customs & Immigration

U.S. security officials said they were working with the Federal Aviation Administration on implementation of the order.

The FAA has issued multiple warnings—including a safety alert last year—about storing lithium batteries, such as those used in common consumer electronic devices, in the cargo hold of planes.

FAA battery fire testing has highlighted the potential risk of a catastrophic aircraft loss due to damage resulting from a lithium battery fire or explosion. Current cargo fire suppression systems cannot effectively control a lithium battery fire. As a result of those tests, the International Civil Aviation Organization (ICAO) and aircraft manufacturers Boeing and Airbus have advised airlines about the dangers associated with carrying lithium batteries as cargo and also have encouraged them to conduct safety risk assessments.

Officials also acknowledged there could be greater concern of thefts of personal electronics from passengers’ checked baggage.

“Of course we’re always concerned about people’s personal valuables,” one U.S. security official told reporters. “But we’re also concerned about the security of the airplane and we’re taking the measures that the threat indicates.”

–>READ: How to Choose the Best Luggage Locks

Scrutiny of Electronics Heightened in 2014

In 2014, U.S. authorities increased scrutiny of electronics carried by passengers on certain flights.

Some travelers were required to show airport screeners that electronic devices, such as cellphones and tablets, could power on; but there was no electronics ban.

The security protocol expanded to not just fliers within the United States, but also for travelers flying into the United States from abroad, CNN reported at the time and experienced multiple times by this reporter. 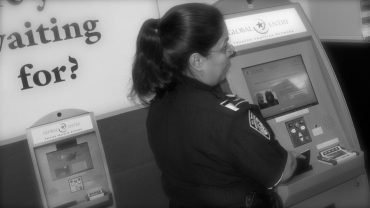 Senior administration officials on Monday night would not discuss any specific concerns with passenger screening at the 10 airports targeted by the new electronics ban.

One of the airports, Abu Dhabi, even has U.S. Customs and Border Protection officials staffing a pre-clearance facility that subjects passengers to U.S. immigration screening before departure.

“The effort was not focused specifically on any one location or country,” one administration official said in the background briefing.

“It’s really addressing the threat and how we perceive the threat. And what we’re doing is what we feel is the right things at the right place to address the threat and guarantee the safety of our traveling public,” this official said.

“We believe that the threat is still prominent against aircraft and airports. And for that reason, we made a determination that these measures are necessary.” the same official added.

Early Tuesday afternoon, the Executive Vice President for Public Affairs of the U.S. Travel Association, Jonathan Grella, issued a statement calling on federal authorities to “make every effort to minimize disruption to legitimate travelers by clearly and quickly articulating the details…”

“Even with security as a justification, it does not absolve authorities of the responsibility to communicate,” Grella said.

The statement continued: “We continue to hope that highly visible changes to security protocols in the future will be accompanied by a clear message that the government’s intent is not to suppress, but to secure travel, and that legitimate international business and leisure travelers remain welcomed and valued by the United States.”

The Global Business Travel Association noted that while security of airlines “is of the utmost importance,” not allowing business travelers to carry their devices, such as laptops, onboard, “cuts productivity, taking away time that they can be getting business done.”

Would you fly on a flight without electronics? Let us know in the comment section below

Mark Albert
Mark is a Peabody Award-winner who has reported in newsrooms across the country, most recently as a freelance correspondent at CBS News. He's traveled to 60 countries so far and plans to get to the rest—with a little luck.
Previous post Major Hotel Chain Giving Away Free Hotel Stays ‘For Life’ Next post Delta Announces Date of One of ‘Largest Terminal Moves’ in Aviation History; 21 Airlines