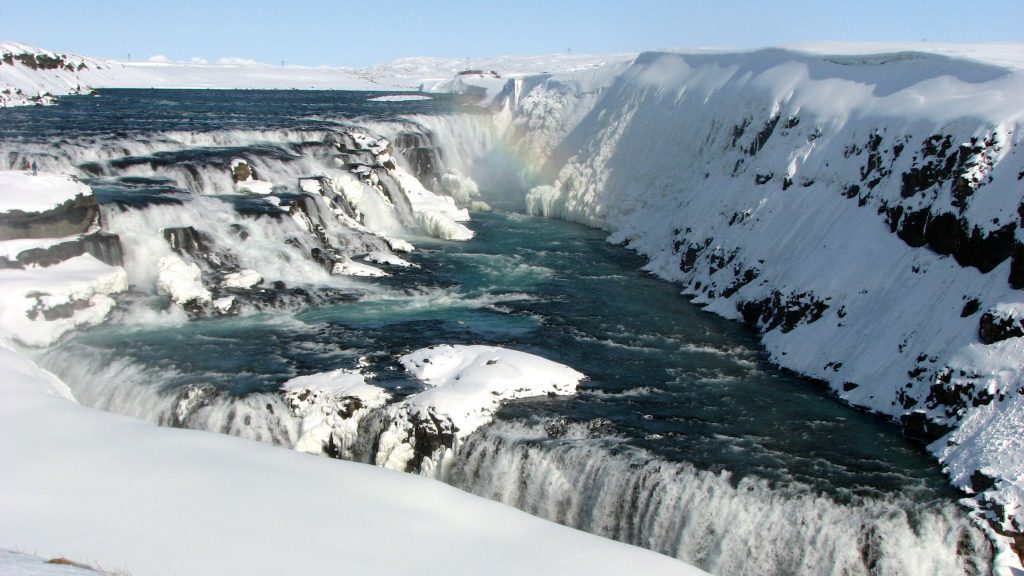 AMSTERDAM (TVR) – Air traffic at Europe’s airports surged in the first half of 2017, including to Iceland, up a strong nine percent despite recent terror attacks, as well as political and economic uncertainty in some parts of the globe.

ACI EUROPE, a European airport trade body, said in its most recent air travel report that the “impressive growth” in passenger trips was due in part to terrorism-affected countries “bouncing back,” as well as strong demand in Russia and Turkey, along with oil prices that remain under $55 a barrel, leading to stable jet fuel prices.

“Passenger volumes have expanded by close to 30% since 2012. This kind of growth has clearly outstripped the most optimistic forecasts – something that should be borne in mind by anyone who doubts the looming airport capacity crunch facing Europe.” 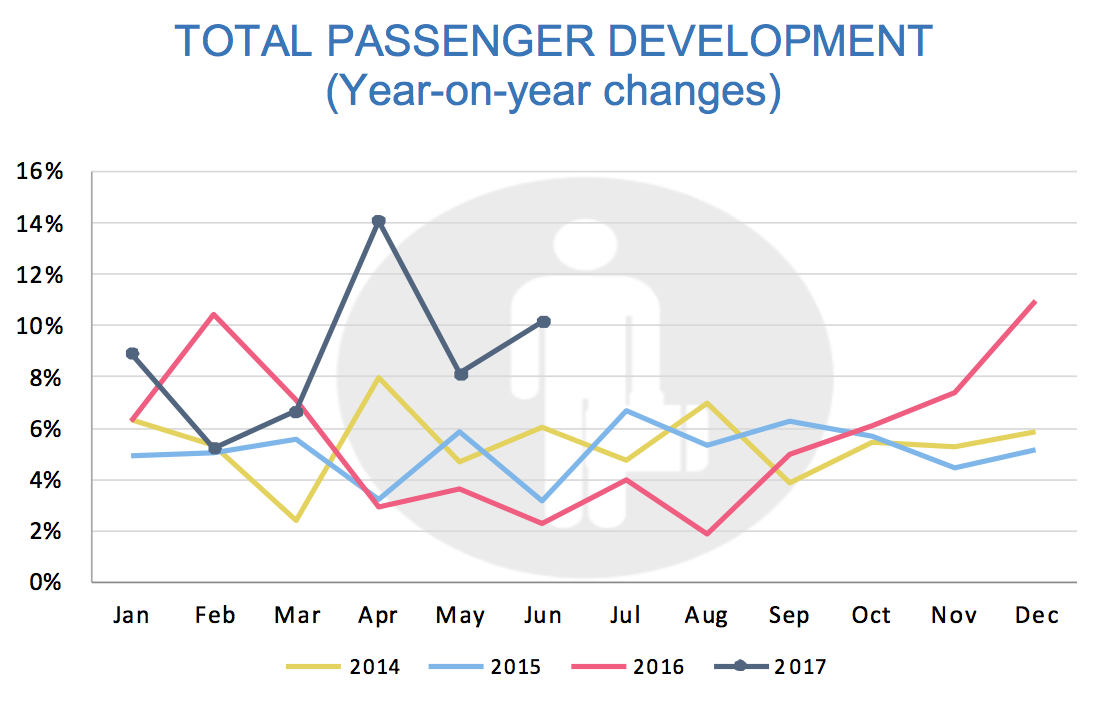 Travelers from the U.S. are especially enchanted with Iceland this year.

The number of people flying roundtrip to the island nation from America has skyrocketed 42% so far this year compared to last year, according to Airlines Reporting Corp, which analyzed booking data from more than 12,000 U.S. retail and corporate travel agencies.

The cascade of Iceland visits is being fueled, in part, by low airfares and increased options from low cost carriers (LCCs).

Airfares to Iceland are down approximately 10% from the U.S. this year, with the average roundtrip costing $800 in 2017.

Tickets can often be even cheaper with Iceland included as a stop over to another country.

The top destination during Iceland visits was the Blue Lagoon thermal pools and spa, outside of Reykjavik, the capital.

Iceland
Travel around the Iceland’s Ring Road to experience the Blue Lagoon, the Great Geyser, ice-climbing, and the Northern Lights.

Among the largest airports in Europe, Russia’s Moscow International (SVO) saw the biggest growth, with traffic spiking 17.7% in the first six months of 2017.

Growth was even stronger among the next tier of airports.

“The outlook is very positive for the rest of the year with the economy—especially in the Eurozone—expected to maintain its growth trajectory and oil prices set to remain contained,” ACI’s Jankovec noted.

He did warn, however, that the upward trend of air travel on the continent could be disrupted by “geopolitical upsets,” and that Brexit—Great Britain’s impending departure from the European Union—is the “number one worry” for many airport chief executives.

“The countdown to March 2019 keeps ticking and if no progress is achieved in the coming months, we are likely to see negative impacts on aviation kick in already next year,” Jankovec predicted. 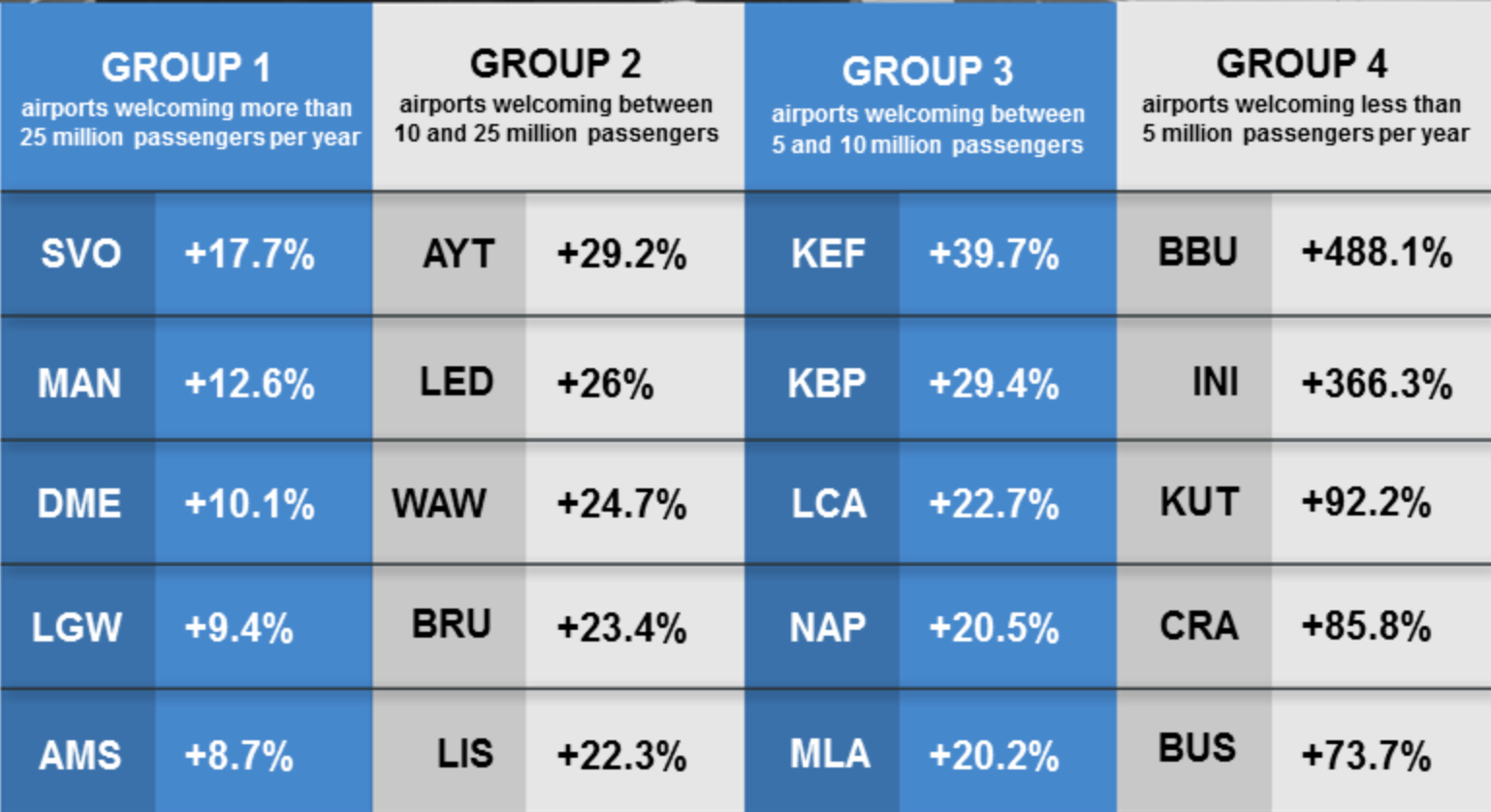 Mark Albert
Mark is a Peabody Award-winner who has reported in newsrooms across the country, most recently as a freelance correspondent at CBS News. He's traveled to 60 countries so far and plans to get to the rest—with a little luck.
Previous post Lower Fares ‘Likely to Fade’ as Air Travel Hits 12-Year High Next post ‘Extraordinary’ Pilot Shortage Threatens Flights; 637,000 Needed