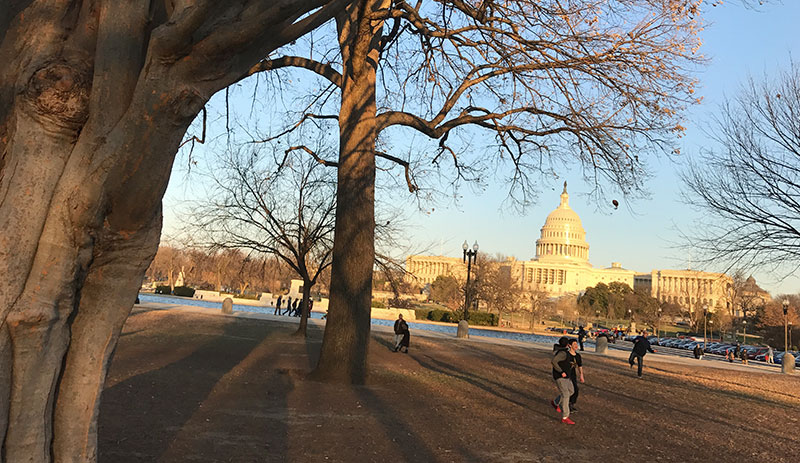 Puerto Rico
Nearly 3/4ths of America’s rum comes from this commonwealth. Explore wartime forts, Old San Juan, and the world’s largest single-dish radio telescope.
United States
From sea to shining sea, explore America’s hidden gems: underwater National trail, thunderous buffalo roundup, and a memorial still being built after 70 years.
United States by Rail
Ride the rails from the Atlantic to the Pacific and through the Southwest of the United States with our best rail routes on Amtrak.
US Virgin Islands
Swim through the nation’s first totally underwater trail, see where Alexander Hamilton grew up, and claim $300 in spending credits! 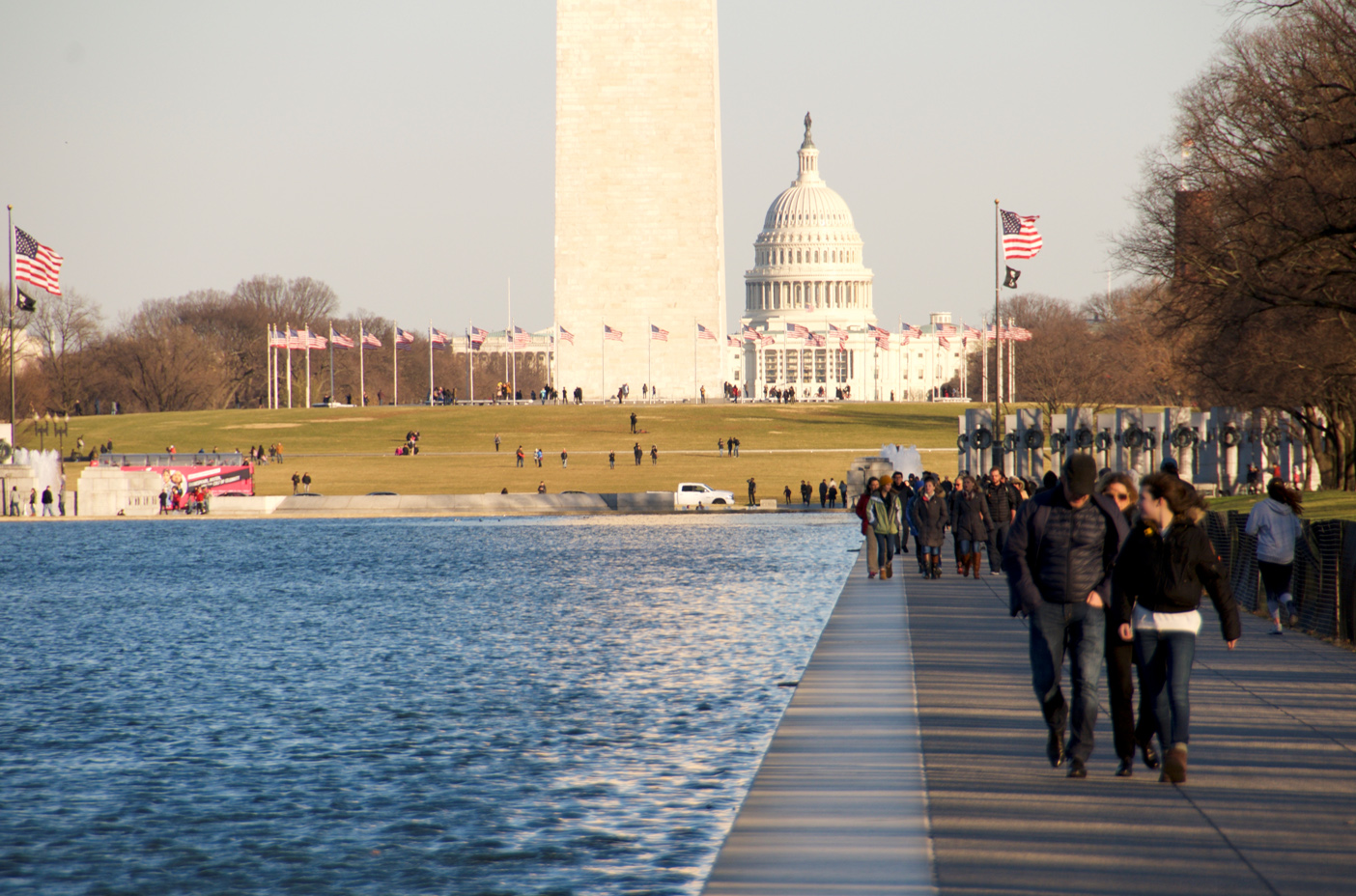 Washington, D.C. Lodging
–>To purchase images of Washington, DC’s most iconic landmarks on canvas or framed posters, visit our Shop 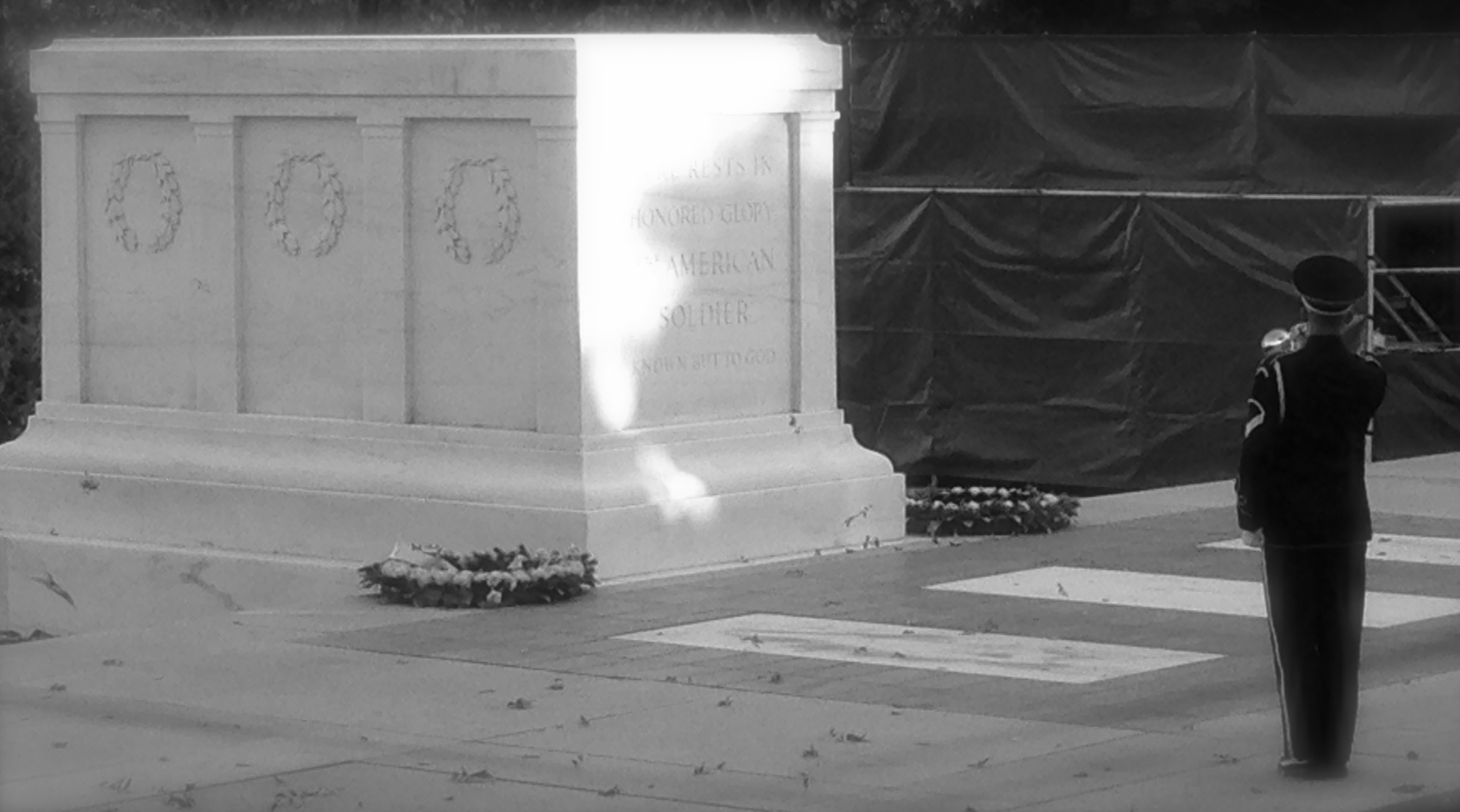 The Washington, D.C. region is served by three major airports:

DCA is the closest: just across the Potomac River from Washington. IAD is about a 45 minute drive away with no traffic; BWI is an hour and 15 minutes with no traffic.

Amtrak serves DC at Union Station (WAS) and connects to routes and cities up and down the East Coast.

The “Beltway” area has a robust subway system run by WMATA. Learn more about how to use it from The Washington Post.

If you’re planning to drive into DC, note that EZPass toll roads have expanded on several interstates serving DC, as well as the expansion of carpool restrictions.

On I-66 in Virginia, for example, the entire interstate—all lanes—heading eastbound (east of the Beltway/I-495) into the District are restricted to express lane toll pricing from 5:30a to 9a and westbound from 3p to 7p for solo drivers. Carpoolers can drive for free, but need a special EZPass transponder.

More information on all the restrictions for DC-surrounding highways can be found here.

Also, DC parking meters can be paid with the Parkmobile-Parking made easy with mobile app, so no need to pack quarters in your carry-on luggage. Download the app (not the change) before arrival.

Some spots can even be reserved in advance. 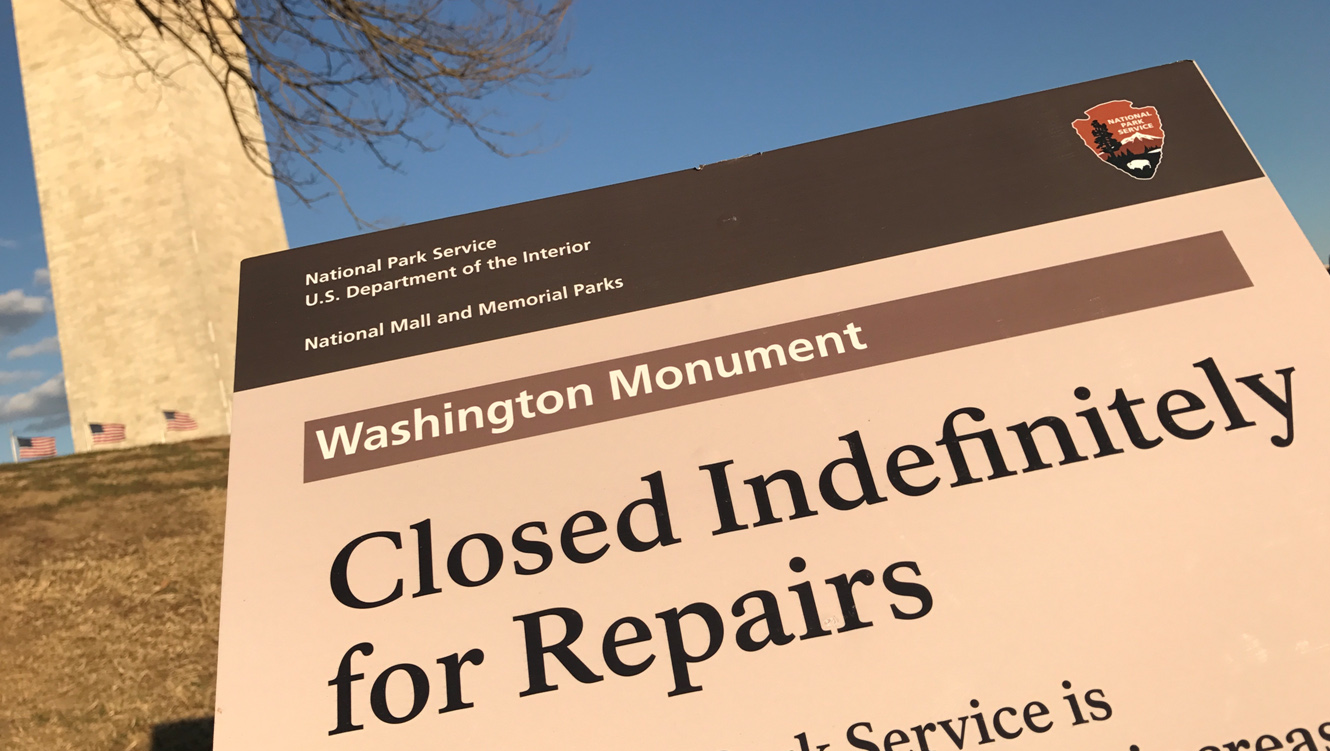 The Washington Monument is closed indefinitely for repairs to its creaky elevator. We’ll update this post when the monument to America’s first president reopens. Signs are posted near the base of the monument.

The National Mall is two miles end-to-end (Capitol to the Lincoln Memorial), so four miles round trip. We suggest you save time by planning your route in advance and knowing that certain spots along the Mall—and in Washington—will take longer than others.

For example, visiting Ford’s Theater, site of President Abraham Lincoln’s assassination, and the Capitol building is doable in one day.

However, the Smithsonian’s popular and crowd-pleasing National Air & Space Museum and the somber United States Holocaust Memorial Museum will both consume many hours of your day and are best done separately.

Washington, DC, set a record for tourism in 2016, when 20 million people visited.

As mentioned in the Top Travel Tips in Two Minutes video above, free tickets must be requested to take a tour of the White House. The process begins with a request to your House Representative or Senator. Requests are accepted up to six months before your visit. Don’t wait until the last minute, though, because your name and personal information will be checked through several government databases.

Therefore, put in a request no later than six weeks before your visit.

White House tours are generally Tuesday-Saturday mornings and can be canceled at any time due to world events or the president’s schedule. Want to tour the White House when it’s decorated for the holidays? Plan ahead: requests begin in June.

For a guided tour of the U.S. Capitol, reservations are strongly encouraged due to limited slots at busy times.

Tickets and reservations are not necessary for a guided tour of The Supreme Court building; just show up on your preferred day. Note that tours are not allowed during oral arguments, when the justices hear cases. The Court’s term begins on the first Monday in October.

Check the Court’s calendar for when arguments are being heard.

You can sit in on arguments and they are a treat to watch the justices verbally parry back and forth with the high-priced attorneys, although you’ll likely have to wait in line to get a seat. The bigger the case, the longer the line.

Although if you’re only interested in a quick peak at the action, a separate line will take you in for just three to four minutes. 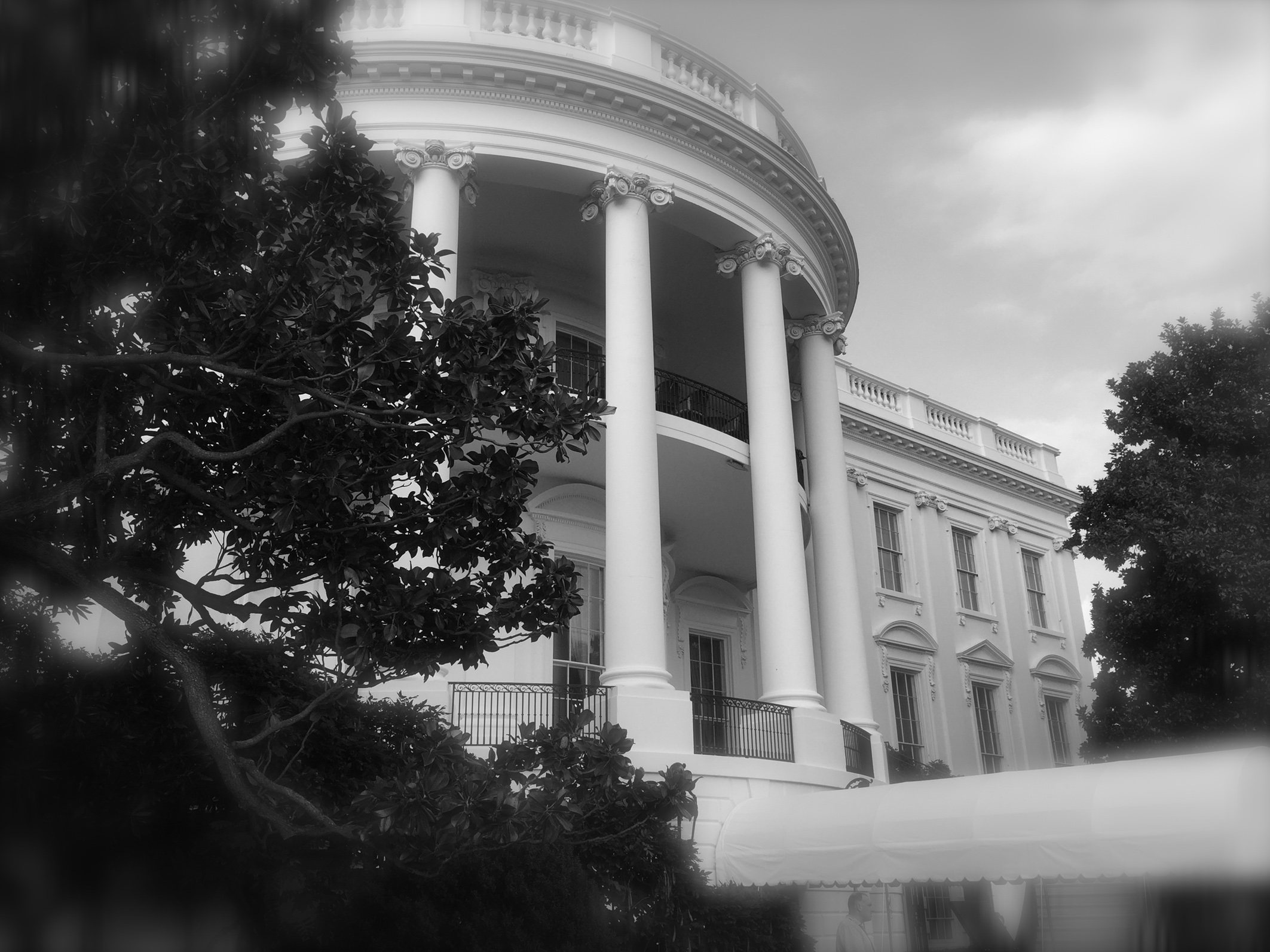 The view of the South Portico of the White House

The Smithsonian’s museums and galleries—all 19 of them spread out across the Capital—are free.

Other well-publicized, but for-profit, attractions, like the International Spy Museum, are most certainly not free.

All government buildings, such as the Capitol, Supreme Court, and the White House, are free to enter; the White House requires free tickets obtained in advance.

Looking to catch a free concert?

The US military bands and the National Symphony Orchestra regularly play on the steps of the US Capitol’s west front (facing the National Mall).

Here’s a calendar of their performances, often timed perfectly to hit the right notes at sunset. 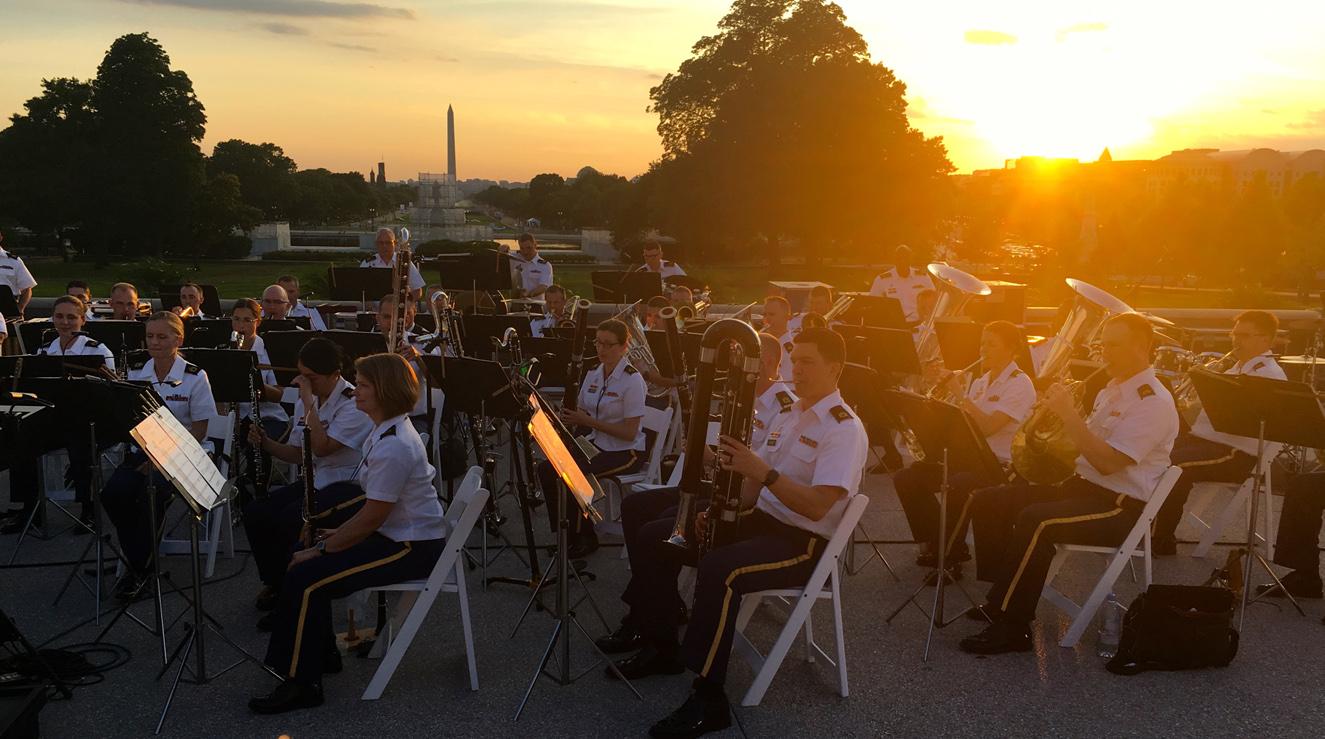 If you have a rental car, fill up the tank outside of D.C., where prices are much cheaper than in the District. So consider getting gas on your way to, or returning from, day excursions to the Gettysburg battlefield (1hr 45 min drive), Colonial Williamsburg (3 hour drive), or Luray Caverns (2 hr drive). It’ll save you a bundle.

Be aware that some hotels with “Capitol Hill” or “Washington, DC” in their names that have an attractive price may be in less-than-ideal neighborhoods or far, far away from either the Capitol building or Washington, DC.

In DC, Mark has stayed at the Hilton Garden Inn, right near the White House. Thank you for using our referral (“affiliate”) links to support our journalism.

What do you love to do in Washington, DC?

TRANSPARENCY NOTICE: No free or discounted travel, gifts, or services or the promise of any compensation were accepted from any of the places, merchants, or products included in this article at the time they were reviewed. The decision to travel somewhere or review something is made by the The Voyage Report alone with no input from advertisers. We believe in credibility and integrity and cannot be bought.

Mark Albert
Mark is a Peabody Award-winner who has reported in newsrooms across the country, most recently as a freelance correspondent at CBS News. He's traveled to 60 countries so far and plans to get to the rest—with a little luck.
Previous post Puerto Rico Next post Australia